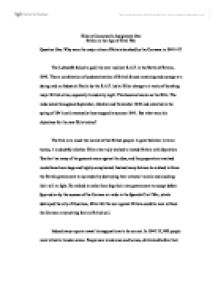 History Coursework Assignment One Britain in the Age of Total War Question One: Why were the major cities of Britain bombed by the Germans in 1940-41? The Luftwaffe failed to quell the ever resilient R.A.F. in the Battle of Britain, 1940. Then a combination of underestimation of British forces remaining and outrage at a daring raid on Industrial Berlin by the R.A.F. led to Hitler change to a tactic of bombing major British cities, especially London by night. This became known as the Blitz. The raids lasted throughout September, October and November 1940 and restarted in the spring of 1941 until eventually they stopped in summer 1941. ...read more.

Indeed many reports reveal his suppositions to be correct. In 1940 13, 000 people were killed in London alone. People saw loved ones and homes, obliterated before their eyes. In Balham 64 drowned in the underground because of burst water mains. Many who heard were distraught as they believed the underground was the only truly safe place left to them. The incident was frantically smothered by the government controlled media with smiling faces and tales of British heroism. But it showed how at times Hitler's suppositions were very close to coming true. The second objective for the bombings was to destroy industry. The London docks were bombarded with regularity. ...read more.

This was to cause two things. Firstly to create a sense of chaos and inability to muster a coherent defence against the Germans. Hitler also hoped that the confusion would be a direct cause of the first two objectives. He hoped that the ability to effectively distribute resources and supplies would be impaired as would the process of law making and strategic defensive and offensive decisions. He also hoped media control and propaganda would not function properly that morale along with administrative order would come crashing down making surrender inevitable. In conclusion there were three major targets for the Blitz. Firstly, and most importantly the breaking of British will and morale, secondly the crippling of British economy and industry, and finally the breaking up of any coherent bodies of administration and order. ...read more.