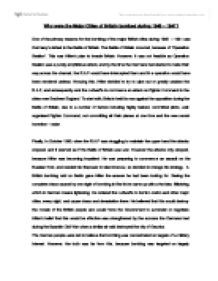 Why were the Major Cities of Britain bombed during 1940 - 1941? One of the primary reasons for the bombing of the major British cities during 1940 - 1941 was Germany's defeat in the Battle of Britain. The Battle of Britain occurred, because of "Operation Sealion". This was Hitler's plan to invade Britain. However, it was not feasible as Operation Sealion was a purely amphibious attack, and by the time the Germans had started to make their way across the channel, the R.A.F would have intercepted them and the operation would have been rendered useless. Knowing this, Hitler decided to try to wipe out or greatly weaken the R.A.F, and subsequently sent the Luftwaffe to commence an attack on Fighter Command in the skies over Southern England. ...read more.

However the attacks only stopped, because Hitler was becoming impatient. He was preparing to commence an assault on the Russian front, and needed his firepower to take Moscow, so decided to change his strategy. A British bombing raid on Berlin gave Hitler the answer he had been looking for. Seeing the complete chaos caused by one night of bombing in Berlin he came up with a the idea. Blitzkrieg, which in German means lightening. He ordered the Luftwaffe to bomb London and other major cities, every night, and cause chaos and devastation there. He believed that this would destroy the morale of the British people who would force the Government to surrender or negotiate. ...read more.

Initially Hitler's plan was to destroy factories, to disrupt British industry and cripple the economy. Highly populated large cities containing factories, shipyards and naval bases were obviously much easier targets than single factories, and as most of the bombing took place at night, Cities made a much easier target. Subsequently Hitler failed to put British industry out of action, and the vast majority of factories remained in production throughout the war. The bombing of the major cities however had a negative effect on the morale of the people, and it was the destruction of the morale of the British people, that Hitler believed would win him the war. ...read more.