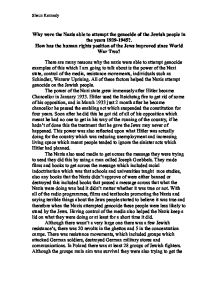 Why were the Nazis able to attempt the genocide of the Jewish people in the years 1939-1945?.How has the human rights position of the Jews improved since World War Two?

Why were the Nazis able to attempt the genocide of the Jewish people in the years 1939-1945?. How has the human rights position of the Jews improved since World War Two? There are many reasons why the nazis were able to attempt genocide examples of this which I am going to talk about is the power of the Nazi state, control of the media, resistance movements, individuals such as Schindler, Warsaw Uprising. All of these factors helped the Nazis attempt genocide on the Jewish people. The power of the Nazi state grew immensely after Hitler became Chancellor in January 1933. Hitler used the Reichstag fire to get rid of some of his opposition, and in March 1933 just 2 month after he became chancellor he passed the enabling act which suspended the constitution for four years. Soon after he did this he got rid of all of his opposition which meant he had no one to get in his way of the running of the country, if he hadn't of done this the treatment that he gave the Jews may never of happened. This power was also reflected upon what Hitler was actually doing for the country which was reducing unemployment and increasing living space which meant people tended to ignore the sinister acts which Hitler had planned. ...read more.

Another man involved with the Nazis that had something to do with the treatment of the Jews was a man called Oscar Schindler, this man profited from the Jews by using them as workforce and as you can imagine it wouldn't be very expensive labour, but this man also helped the Jews by giving them more calories than a factory would and by also saving hundreds of them by saying that he was going to build a factory to produce armaments or the Nazis and that the Jews on a list which he had drawn up would work for him, his excuse for taking these workers was that they were already trained and didn't want to start from scratch with a new workforce. There was other people who helped saved the Jews such as Cardinal Angelo Roncalli who successfully stopped the Bulgarian King not to be allowed Bulgarian Jews to be transported But even with men like this on there side the Jews still couldn't stop the killing as the Nazis were too powerful. The Warsaw Uprising is probably the most famous Jewish resistance, what happened was in April 1943, 2,000 armed SS troops entered the Warsaw ghetto to round up the remaining Jews, but there was a surprise awaiting the SS as 700 of the ZOB movement fought back with tanks, grenades and guns. ...read more.

This happened and straight after there was fighting and there was an invasion on the new Jewish state but the Israelis won the war on January 6 1949.Since 1948 four more Arab - Israeli wars have been fought. Since the end of the war the German state has paid compensation to the Jewish survivors for their suffering and there is about 40,000 Jews living in Germany now. Anti-Semitism continued after the war though but in 1990 the East German government made an apology to the Jewish people. Unfortunately there is still racial attacks for instance in 1991 there were 2,074 racial attacks in Germany alone. After the war the treatment of Jews in the Soviet Union didn't get much better as after the the Jewish state of Israel was formed many Jews wanted to emigrate there but were not allowed by the communist government and a lot of Jews were locked up for protesting against this but after the fall of the Soviet Union in 1991 a large number of Jews have emigrated to Israel. In conclusion to this the rights for Jews did get better after the war but not to the extent in what you would of first expected as the treatment of them in Germany and the Soviet Union carried on from the war and although not to the extent of what it was, it was still bad enough to be classed as discrimination against the Jews. ?? ?? ?? ?? Shaun Kennedy ...read more.