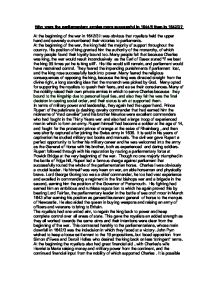 Why were the parliamentary armies more successful in 1644/5 then in 1642/3? At the beginning of the war in 1642/3 it was obvious that royalists held the upper hand and severely outnumbered their victories to parliaments. At the beginning of the war, the king held the majority of support throughout the country. His position of king granted him the authority of the monarchy, of which many people found their loyalty bound too. Many people felt that because Charles was king, the war would result inconclusively as the Earl of Essex stated "if we beat the king 99 times yet he is king still'. His title would still remain, and parliament would have restrained control. They feared the impending punishments if parliament lost, and the king rose successfully back into power. Many feared the religious consequences of opposing the king, because the king was directed straight from the divine right, a long standing idea that the monarch was picked by God. Many opted for supporting the royalists to quash their fears, and ease their consciences. Many of the nobility raised their own private armies in which to serve Charles because they bound to the kingship due to personal loyal ties, and also they felt he was the final decision in casting social order, and their status is what supported them. ...read more.

Parliament at the beginning of the war had weak and inexperienced leaders such as the Earl of Essex, who earned his position alone on social status. At the age of 51 he was considered too old, but gained the continual support of John Pym for whom he had worked loyally for in the lords. Williams Waller was probably their second strongest commander with a stint of service in the thirty year war, but a strong opposition to the downfall of the king. Lord Ferdinando Fairfax was perhaps the best general of the parliamentarians. He possessed international military experience and had the characteristics of an honest, decent and principled man. Cromwell only became involved with the military towards the end of the war; he proved to be a good horseman, though he had no military experience he became to be considered an outstanding general and never lost a battle. The self denying ordinance and the development of the new model army soon put a stop to the weak leaders. Probably one of the main influences that clinched parliament's success was the creation of the New Model Army. The New Model Army was created in February of 1645 in a bid to raise a professional organized and controlled army constituting of well behaved, paid and uniformed men. ...read more.

We have evidence of this from Maurice's army which shrank in September 1644 from 4,600 men to 2,000. Also many soldiers developed localism, which meant they were willing to fight for their country but not willing to go further a field than their own county. Providing accommodation and food for a large army also proved a prominent problem. Many commanders resorted to encouraging their troops to billet towns, which caused massive resentment from the people towards the occupying army. Their behaviour was atrocious including stealing, fighting and the large consumption of alcohol. At the end of the war many counties were owed thousands of pounds of compensation due to the effects of billeting and many men were also expecting a long back payment for their service in the war. Parliament's victory in the war rested heavily on the self denying ordinance and the knock on effects of the New Model Army. A pattern with good leadership has also prevailed; once the social status of an individual had been ignored and the focus put on their own ability did the true talent begin to show. This applies to leadership as well as ordinary troops. In conclusion the parliamentarians came through their problems by using a mixture of long term and short term structures, but mainly the remodelling of their army amidst a civil war was a precarious yet very successful strategy. Abigail Morrish 12A Miss Abbott ...read more.