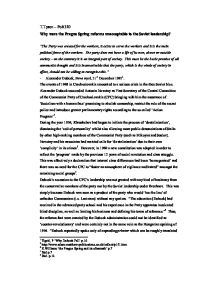 Why were the Prague Spring reforms unacceptable to the Soviet leadership?

T.Tyson - Poli 310 Why were the Prague Spring reforms unacceptable to the Soviet leadership? "The Party was created for the workers, it exists to serve the workers and it is the main political force of the workers. The party does not have a life of its own, above or outside society - on the contrary it is an integral part of society. This must be the basic premise of all communist thought and it is inconceivable that the party, which is the whole of society in effect, should not be willing to recognise this." - Alexander Dubcek, Nova mysl, 31st December 19671. The events of 1968 in Czechoslovakia amounted to a serious crisis in the then Soviet bloc. Alexander Dubcek succeeded Antonin Novotny as First Secretary of the Central Committee of the Communist Party of Czechoslovakia (CPC) bringing with him the assurance of 'Socialism with a human face' promising to abolish censorship, restrict the role of the secret police and introduce greater parliamentary rights according to the so-called 'Action Program'2. During the year 1956, Khrushchev had begun to initiate the process of 'de-stalinisation', dismissing the 'cult of personality' whilst also allowing more public denunciations of Stalin by other high-ranking members of the Communist Party (such as Mikoyan and Suslov). Novotny and his associates had resisted calls for 'de-stalinisation' due to their own 'complicity' in its crimes3. However, in 1960 a new constitution was adopted in order to reflect the 'progress' made by the previous 12 years of social revolution and class struggle. ...read more.

the decision to invade was necessary because of pressures from leaders of other Warsaw pact countries."16. Jiri Valenta who developed this theory further backs up this view. "Party leaders in non-Russian Soviet republics, regional party officials, apparatchiki in ideology, the KGB, the political control network in the armed forces and the Warsaw pact command - had gathered enough influence to be able to override a counter-coalition that was sceptical about the use of force and push a vacillating Leonid Brezhnev into action."17 However, this model of explanation has its flaws, and the intervention of Soviet forces cannot be simply explained by pointing towards 'bureaucratic wrangling' and dissatisfaction amongst administrations in other Warsaw pact states. However, there does seem to be a certain amount of truth to this view and must surely have played a part in the eventual decision to invade Czechoslovakia. "As far as I know, the impression Dubcek gained from this private meeting [with Brezhnev on August 1st 1968] was that Brezhnev was in conflict with the "hawks" in his own politburo... and was genuinely looking for a way out of the predicament that would vindicate his moderation and enable him to stand up to pressure from Ulbricht and Gomulka."18 Much has been made of the influence of certain 'products' of the Prague spring on the decision of the Soviet leadership to intervene. Perhaps the most well known, Ludvik Vaculik's 'two-thousand word' statement that outlined the reformists' calls for liberalisation whilst also outlining the very real fear of conservative resistance to the liberalisation movement and the possibility of Soviet Intervention. ...read more.

Ideologically, Moscow was challenged by the Prague reformers as they suggested that Lenin had developed his own system of Marxism to fit Russian conditions. This was totally unacceptable to Moscow as the self-professed chief 'ideologue' in the communist system. Also, the Soviet leadership was very worried about the position of the 'leading role of the party'. As the party in all Leninist systems must have complete control over all branches of government, including the judiciary, Moscow was very concerned about the 'dismantling' of party control in Czechoslovakia. "Party control over the National assembly underwent substantial erosion in Czechoslovakia during 1968. Votes of no confidence were passed on leading officials, open and free debates marked Assembly sessions, and a system of Assembly committees with rights to subpoena and examine witnesses began to function."27 There are a number of factors involved in explaining why the Soviet leadership could not tolerate the Prague Spring reforms of 1968. Perhaps the most important one is the most basic, namely 'imperial ambitions' on the part of the USSR. The soviet empire was largely based on total conformity throughout the entire soviet bloc, and the philosophical incompatibility of dissent within a Leninist system must have influenced the Soviet leadership into invading Czechoslovakia due to the reform package of the 'Action Program' being largely based on a 'loosening' of the CPC's control over the press and the right to freedom of Speech. This must surely have been completely intolerable to the Soviet leadership, particularly after the Hungarian uprising in 1956. ...read more.