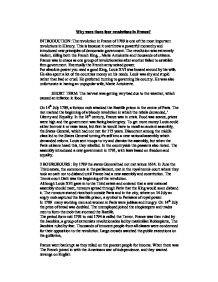 Why were there four revolutions in France?

Why were there four revolutions in France? INTRODUCTION :The revolution in France of 1789 is one of the most important revolutions in History. This is because it overthrew a powerful monarchy and introduced new principles of democratic government. The revolution was extremely violent, killing both the French King, , Marie Antoinette and thousands of citizens. France was in chaos as one group of revolutionaries after another failed to establish firm government. Eventually the French army seized power. For absolute power you need a good King, Louis XVI was bossed around by his wife. He also spent a lot of the countries money on his needs. Louis was shy and stupid rather than bad or cruel. He preferred hunting to governing his country. He was also unfortunate in having an unpopular wife, Marie Antoinette. SHORT TERM: The harvest was getting very bad due to the weather, which caused an inflation in food. ...read more.

The Tennis court Oath was the beginning of the revolution. Although Louis XVI gave in to the Third estate and ordered that a new national assembly should meet, rumours spread through Paris that the King would soon disband it. The rumours started riots both outside Paris and in the city, where on 14 July an angry mob captured the Bastille prison, a symbol to Parisians of royal power. In 1789 many working men and women in Paris were jobless and hungry. On 14th July the price of bread was doubled. The unemployed joined the shopkeepers and trades men to form the mob that stormed the Bastille. The period form mid 1793 to mid 1794 is called the Terror. France was then ruled by the Jacobins, a group of extremists revolutionaries led by maximilian Robespierre, The Jacobins ruled by fear. Thousands of innocent people from all classes were condemned for their opposition to the revolution. ...read more.

The King wasn't given any money as he had already borrowed some money, and not been able to return it. The King was bankrupt so he had to tax the nobles. 1788 the King was bankrupt. Nobles middle class trades men peasants were the majority of France. They paid the countries tax, and the very rich minority didn't pay any. The Nobles were dissatisfied with Louis absolute ruling, and liked the idea of England's parliament. The Nobles wanted Oligarchy. The crown was getting short of money due to wars. Poor clergy were unsatisfied as they couldn't be in the high arhcy. Peasants were unhappy as they had to pay feudal tax to the clergy, The Bourgeoisie, middle class, had to pay a lot of tax. In the Bourgeoisie, there were many famous philosophers which the French used to read, The philosophers were angry about the tax payments, and also about the religions, as the whole fo France was Catholics. Bourgeoisie read these books and agreed with them. The Nobles were asked for money, they refused unless they got representation. ...read more.