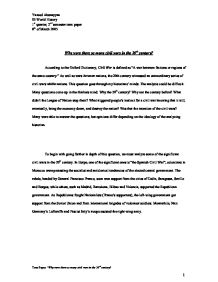 Why were there so many civil wars in the 20th century?

Why were there so many civil wars in the 20th century? According to the Oxford Dictionary, Civil War is defined as "A war between factions or regions of the same country." As well as wars between nations, the 20th century witnessed an extraordinary series of civil wars within nations. This question goes through my historians' minds. The analysis could be difficult. Many questions come up in the thinkers mind: Why the 20th century? Why not the century before? What didn't the League of Nation stop them? What triggered people's instinct for a civil war knowing that it will, eventually, bring the economy down, and destroy the nation? Was that the intention of the civil wars? Many were able to answer the questions, but opinions differ depending on the ideology of the analyzing historian. To begin with going further in depth of this question, we must analyze some of the significant civil wars in the 20th century. In Eurpe, one of the significant ones is "the Spanish Civil War"; colonizers in Morocco were protesting the socialist and anticlerical tendencies of the elected central government. The rebels, headed by General Francisco Franco, soon won support from the cities of Cadiz, Saragossa, Seville and Burgos, while others, such as Madrid, Barcelona, Bilbao and Valencia, supported the Republican government. As Republicans fought Nationalists (Franco's supporters), the left-wing government got support from the Soviet Union and from international brigades of volunteer soldiers. ...read more.

The conflict in the Middle East and Asia are the production of the of the religious, centuries old conflict. One goal all the civil wars share in common is the other party's desire for a full independence due to either ideological differences (Muslims and Christians in Lebanon, for example), which has been solved, or mostly settled, or historical conflicts (Yemen), which remains in pure existence until this very second. Another factor that helped in the provocation of some civil wars, if not most, is the aid of the Soviet Union (USSR) and their support for the communist fighting for, or against, their government. In Africa, there were many civil wars in the 20th century, one of which is Sudanese Civil War between two religions; the Muslims in the North who live in a majority and the minority of Christians who live in a the south and want their full independence of the Arabian Republic of Sudan. In Somalia, In June 1991, Aideed was elected chairman of the United Somali Congress by a two-thirds vote, but Ali Mahdi refused to step down as President. By October 1991, Ali Mahdi had formed a government of eight ministers, and the Italian government promised massive financial support. Civil war erupted as various clan-based military group competed for control after the collapse of Barre's regime. Thus the civil war began. ...read more.

Last, but not least, the twentieth century's civil wars were the result of the inner part of the human beings; the sense of nationality and self-identity were resulting the revolution against people to whom they felt that they did not belong, like the conflict between communists and democrats where the democrats fled to Taiwan and established their own state there. The 20th century wasn't all about civil wars; rather, the 20th century had the First World War and the Second World War within its historical timeline, along with the major world conflicts and economic crises; the civil wars were just aspects of the disastrousness and destructiveness of the 20th century. The 20th century was the sum of many civil wars in the past, quantity-wise. The causes of wars in the twentieth century could be used as the causes of the civil wars, especially the introducing of new war methods and weapons, emerging of ideologies such as fascism and Marxism by Karl Marx. The ideologies were mostly economic-related ideologies in which equilibriums are established in a country, equally amongst the nation. No other century had that much of civil wars like the 20th century. The civil wars were just a part of the many problems in the 20th century, but never to be forgotten. Yazeed Abunayyan IB World History 1st quarter, 2nd semester term paper 8th of March 2003 1 Term Paper: "Why were there so many civil wars in the 20th century? ...read more.