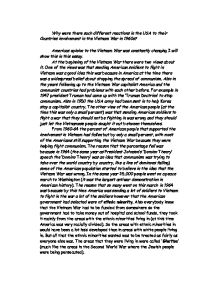 Why were there such different reactions in the USA to their Countries involvement in the Vietnam War in 1960s?

Why were there such different reactions in the USA to their Countries involvement in the Vietnam War in 1960s? Americas opinion to the Vietnam War was constantly changing I will show this in this essay. At the beginning of the Vietnam War there were two views about it. One of the views was that sending American soldiers to fight in Vietnam was a good idea this was because in America at the time there was a widespread belief about stopping the spread of communism. Also in the years following up to the Vietnam War capitalist America and the communist countries had problems with each other before. For example in 1947 president Truman had came up with the 'Truman Doctrine' to stop communism. Also in 1950 the USA army had been sent in to help Korea stay a capitalist country. The other view of the American people (at the time this was only a small percent) was that sending American soldiers to fight a war that they should not be fighting in was wrong and they should just let the Vietnamese people sought it out between themselves. From 1960-64 the percent of American people that supported the involvement in Vietnam had fallen but by only a small percent, with most of the Americans still supporting the Vietnam War because they were helping fight communism. ...read more.

and on other areas like hospitals. The US government was not happy about this and when they found out they made sure that he got two years in prison because of his outburst. The American government did this also because they did not want to see people copying David Miller's ideas by burning or misusing their draft cards in the same way that he did. However this wasn't the reaction of the American people because the same thing was starting to happen all across America intensifying the initial protests. The people that did this soon became known as 'draft dodgers'. The boxing legend Mohammed Ali 'The Greatest' and heavyweight champion at one point. In 1967 astonished Americans by becoming a draft dodger by refusing to join the fight to win the Vietnam War. Because Ali refused to join the Vietnam War he was stripped of his boxing championship and sent to prison to two years. At this point Mohammed Ali summed up the way all of the black population across America was feeling about the Vietnam War by saying "I won't fight because no Vietnamese ever called me nigger" This showed that Mohammed Ali was not willing to fight like other people for something that they did not believe in. So why should they fight for something that does not have any meaning? ...read more.

So this made a lot of young people change their minds about helping the war effort and becoming draft dodgers or joining 'Hippie' movements. They also showed soldiers taking drugs, a lot of parents did not want to see their children end up like this. During the Vietnam War many drugs did get used by the soldiers like LSD or marijuana this was to mellow you out, and the soldiers that were being sent were not capable of winning a war because many were just recruits and had no experience or not much training. By 1969 the war in Vietnam was costing a total of $30 billion a year and was costing 300 lives a week. Yet the USA was still not winning. This was upsetting the people even more because once again the government was taking funds from other areas (like hospitals and schools) and the taxes that the people had to pay had gone up. The American people could see through television that they were not winning so they were against paying for something that they were not winning and more people went against the cause that they should keep helping the Vietnamese. So many people knew that the Vietnam War would be over in a short time if no one supported it and they started to object to it. ...read more.