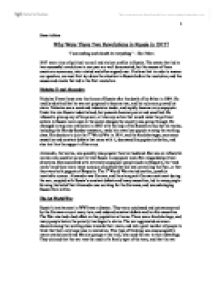 Why Were There Two Revolutions in Russia in 1917?

Simon Addison Why Were There Two Revolutions in Russia in 1917? "I am nothing and should be everything" - Karl Marx 1917 was a time of political turmoil and violent conflict in Russia. The events that led to two successful revolutions in one year are well documented, but the causes of these events are numerous, inter-related and often argued over. I believe that in order to answer our question, we must first lay down the situation in Russia before the revolution, and the causes and events that led to the first revolution. Nicholas II and Alexandra Nicholas II was thrust onto the throne of Russia after the death of his father in 1894. He readily admitted that he was not prepared to become tsar, and his rule soon proved his claim. Nicholas was a weak and indecisive leader, and rapidly became very unpopular. Under his rule Russia industrialised, but peasants became poorer and unsettled. He refused to give up any of his power, or take any action that would make the political system in Russia more open to the social changes the country was going through. He managed to stop one revolution in 1905 with the help of the Russian army, but his tactics, including the Bloody Sunday massacre, made him even less popular among the working class. His decision to join the 1st World War in 1914, and the food shortages, enormous casualties and constant defeats that came with it, decreased his popularity further, and also lost him the support of his army. Alexandra, the tsarina, was possibly less popular than her husband. She was an influential woman who used her power to take Russia in unpopular and often misguided political directions. She associated with extremely unpopular people (such as Rasputin, the 'mad monk') and there were many rumours circulated that she was controlling the Tsar, or that they were both puppets of Rasputin. ...read more.

The Government, as former members of the Duma, was made up largely of middle-class men, with a vast majority from right-wing political parties, such as the Kadets and the Octoberists. This naturally resulted in a right-wing conservative stance. Such a stance was, obviously, alienated from that of the workers who were undergoing increasingly oppressive situations, and the Provisional Government was easily discredited. The Provisional Government, as an 'Authority without Power', quickly realised that although its interests might often conflict with those of the Soviet, both organisations were useless without the other, and that the two must work together in order to accomplish anything. This reliance upon one another was known as dual power. However, despite its alliance with the Petrograd Soviet, the Provisional Government did not take the right steps in order to convince the common people of it's dedication to their demands. The Government never called the election of a Constituent Assembly, but neither did it fully take control and make the hard decisions it needed to. As a result, the Government's inaction became a cause of both decreasing living conditions for the Russian people, and a great decline in popularity as a result. The War and Conditions In Russia Probably the biggest mistake the Provisional Government made was to continue Russia's participation in World War 1. The Russian army was in no better condition to fight the Germans than before the revolution, and the results of the war on the people of Russia were the same as before. What's more, by keeping their soldiers out fighting in Europe, the Provisional Government vastly limited their military support. Meanwhile, the food shortage caused by the war was hitting the Russian people more than ever before. It was also starting to have disastrous effects on the Russian economy. Prices were rising beyond the reach of most Russians, and to make things worse, inflation was causing wages to fall. ...read more.

On the 12th October, a 'Military Revolutionary Committee' was formed as part of the Petrograd Soviet, and was run by Leon Trotsky. This Committee organised how the Bolsheviks would take power, and took control of the Russian troops left in the city, ordering them not to fight against a Bolshevik revolution. On the 23rd October, Kerensky learned of the Bolsheviks' plan, and ordered the closing of the Bolshevik newspaper offices within Petrograd. By the next day, Lenin had ordered the Bolshevik take-over of the city. The Bolsheviks encountered next to no resistance, and by the 25th they controlled the whole city of Petrograd, and had taken over the Provisional Government in the Winter Palace. Most of the Government were arrested, but Kerensky managed to escape to exile. On the 26th November, the overwhelmingly Bolshevik Congress endorsed the Sovarkom, an all-Bolshevik government, with Lenin as the chairman. This announcement quickly led to revolutionary take-overs by the Bolsheviks in other cities, including Moscow. By the 2nd December, The Bolsheviks had control of the major cities in Russia, and had achieved almost all their objectives, including the signing of an Armistace to take Russia out of WWI. In less than a year, Russia had gone through two almost revolutions, which were sparked not by one thing, but by an intricate combination of factors that depended on each other to bring the Russian people to revolt. As a result, both revolutions were almost instantaneous, with almost no fighting or blood loss. However, the periods leading up to each revolution were lengthy, as significant pressure needed to build from a number of sides before either revolution could be carried off. 1917 is remembered as the year of the two Russian Revolutions, but victory could not be claimed, as the real battle over Russia had not yet begun. Soon after, Russia was plunged into a Civil War between the Bolshevik Reds and the opposition Whites, a war in which more blood was spilled than in countless revolutions. 1 ...read more.