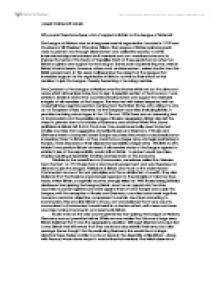 Why would there have been a lot of support in Britain for the League of Nations?

Why would there have been a lot of support in Britain for the League of Nations? The League of Nations was an intergovernmental organization founded in 1919 from the ideas of US President Woodrow Wilson. The League of Nations primary goals were to prevent war through disarmament and collective security, to settle international disputes between both member and non-member states and to impose the terms of the Treaty of Versailles. Each of these goals had an effect on Britain's opinion and support for the League. Some, such as preventing war, were in Britain's best interests; however others, such as disarmament, raised doubts from the British government. In this essay I will examine the aspects of the League that increased support for the organisation in Britain, as well as their effect on her decision to join the League, thereby becoming a founding member. The Covenant of the League of Nations was the charter which set out the aims and code which all member states had to sign. A specific section of the Covenant was Article X. Article X stated that countries should protect and support the territorial integrity of all members of the League. This was met with mixed response, with an overwhelming negative reaction coming from the United States, who wished to stay out of European affairs. However, for the European countries, including Britain, it provided enticing advantages. ...read more.

Some thought that by excluding Germany she would be at a large disadvantage, being unable to vote on issues in the Assembly, while Britain, along with France, was in some ways it's most influential member. The initial absence of Germany from the League of Nations connects with my next point: enforcing the Treaty of Versailles. The Treaty of Versailles did not please any of the Big Three, including Britain. Britain wanted Germany to recover to an extent so that they could restart trading relations, but the Treaty imposed extremely high reparations, crippling Germany's economy. However, one aspect of the Treaty that satisfied Britain was the limitations set for Germany's navy and army. Germany was allowed to have an army of no more than 100,000 men and its navy was limited to 6 battleships, no submarines, 6 cruisers, 12 battleships and 12 torpedo boats. As the enforcement of the Treaty of Versailles was one of the principle aims of the League this increased support for the League in Britain, both for the government and the public. This is because prior to World War One Britain had been involved in a naval arms race with Germany, each of them trying to build the most powerful navy. This meant that theoretically, Britain would not have to fight with Germany for control of the oceans in the coming decades, as Germany would be unable to build a large navy. ...read more.

Therefore if Britain was to be involved in a dispute in which they acted unlawfully the League would be powerless, whereas if a small, militarily-weak country was to do the same the League would be able to effectively criticize and control them. This is shown and illustrated in a quote by Mussolini: "The League is very well when sparrows shout but no good when eagles fall out." The power over member-states that Britain gained in the League was arguably the largest factor which caused support in the British government and public. Overall, there are many reasons which caused support for the League in Britain, both public and governmental. Britain would have large influence and power within the League, especially when compared with other members. They would have the ability to participate in the delegation and dissection of mandates, as well as gaining control of them. Britain also believed that a League of Nations would help prevent the spread of Communism and the rise of aggressive, destructive countries like Germany. Unfortunately, many of these factors for British support were shown to have been unrealistic in the years 1920-1940. The rise of Hitler and other incidents such as the Abyssinia Crisis showed that the League was essentially powerless, often imposing sanctions on the wrong products, such as coal in the Abyssinia Crisis. In conclusion, there were many reasons that caused support for the League in Britain, however there were also reasons which suggested Britain would be in some ways weakened by joining the League. ?? ?? ?? ?? Joseph Holdsworth-Morris ...read more.