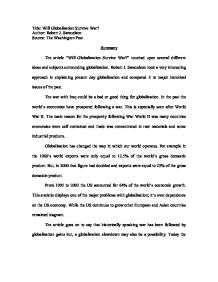 Title: Will Globalization Survive War? Author: Robert J. Samuelson Source: The Washington Post Summary The article "Will Globalization Survive War?" touched upon several different ideas and subjects surrounding globalization. Robert J. Samuelson took a very interesting approach in explaining present day globalization and compared it to major historical issues of the past. The war with Iraq could be a bad or good thing for globalization. In the past the world's economies have prospered following a war. This is especially seen after World War II. The main reason for the prosperity following War World II was many countries economies were self contained and trade was concentrated in raw materials and some industrial products. Globalization has changed the way in which our world operates. For example in the 1960's world exports were only equal to 12.5% of the world's gross domestic product. But, in 2000 that figure had doubled and exports were equal to 23% of the gross domestic product. From 1995 to 2002 the US accounted for 64% of the world's economic growth. This statistic displays one of the major problems with globalization; it's over dependence on the US economy. While the US continues to grow other European and Asian countries remained stagnant. The article goes on to say that historically speaking war has been followed by globalization gains but, a globalization slowdown may also be a possibility. ...read more.

Wars produce surprises, for good and ill. No one expected that World War I would doom the existing global economic system or, more optimistically, that World War II would herald history's greatest prosperity. The question now is whether a war in Iraq, even though much smaller, might also trigger momentous side effects. Only a few years ago globalization seemed irrepressible. We were all advancing (it was said) on flood tides of international trade and investment. After World War II, countries were mainly self-contained economies, with trade concentrated in raw materials (food, fuels, minerals) and some advanced industrial products. This world no longer exists. In 2000, exports equaled 23% of global economic output (gross domestic product), says the World Bank. That was almost double the 1960 level (12.5% of GDP). Cross-border investing is routine. The International Monetary Fund reports that foreign ownership of stocks and bonds totaled $12.5 trillion in 2001: Americans held $2.2 trillion in foreign securities; Japanese, $1.3 trillion, and Germans, $792 billion. Globalization already faces problems unrelated to Iraq: Overdependence on the U.S. economy (it accounted for 64% of world economic growth from 1995 to 2002, says Stephen Roach of Morgan Stanley); stagnation in Europe and Japan; over-indebted developing countries (Argentina, Brazil); the threat in deflation (declining prices), caused by cheap goods from China and Asia; hostility from some labor and environmental groups. ...read more.

German companies already report a backlash from U.S. customers, said the reports. Some American investors balked at buying French bonds. Businesses can usually strike bargains based on financial calculations. War and terrorism create new uncertainties that confound ordinary calculations and may deter global commitments. It might make sense to invest in a South Korean company. But how risky is it to bet on a company next door to a nuclear megalomaniac? Commerce flourishes when there is economic confidence and political stability. The reconstruction of the world economy after World War II occurred because the United States provided both. It created a military umbrella for Europe and Japan. It led the writing of rules for global trade. American economic vitality aided the rest of the world. The gospel of globalization presumed that the end of the Cold War meant more of these good things. American ideas (democracy, free markets) would spread and foster political consensus. Growing global trade and investment would build economic confidence. It isn't so simple. Contradictions abound. American leadership seems strong -- and countries everywhere assail it. Economic pressures draw nations together -- and cultural and political differences pull them apart. Some technologies favor global commerce -- and others abet terrorism. The logic for cohesion resists the power of fragmentation. This looming war may help determine which prevails. Hyperlink http://online.wsj.com/article/0,,SB1045608729895266903,00.html ...read more.