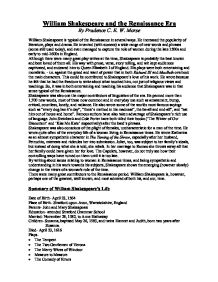 William Shakespeare and the Renaissance Era.

William Shakespeare and the Renaissance Era By Prudence C. E. W. Morse William Shakespeare is typical of the Renaissance in several ways. He increased the popularity of literature, plays and drama. He invented (with success) a wide range of new words and phrases (some still used today), and even managed to capture the role of women during the late 1500s and early to mid-1600s in England. Although there were many great play-writes at the time, Shakespeare is probably the best known and best loved of them all. His way with prose, verse, story telling, and wit kept audiences captivated, and endeared him to Queen Elizabeth I of England. His plays were both entertaining and moralistic. ...read more.

Famous authors have also taken advantage of Shakespeare's rich use of language. John Steinbeck and Cole Porter have both titled their books ('The Winter of Our Discontent' and 'Kiss Me Kate' respectively) after the bard's phrases. Shakespeare was also conscious of the plight of females, uncharacteristic for a man of the time. He wrote quite often of the everyday life of a woman living in Renaissance times. He wrote Katharina as an almost sympathetic character in The Taming of the Shrew, especially after her husband, Petruchio, mistreats and ridicules her into submission. Juliet, too, was subject to her family's ideals, but instead of doing what she is told, she rebels. In her marriage to Romeo she throws away all that her family could have given her for love. ...read more.

Died- April 23, 1616 Plays- * The Tempest * The Two Gentlemen of Verona * The Merry Wives of Windsor * Measure to Measure * The Comedy of Errors * Much Ado About Nothing * Love's Labour's Lost * A Midsummer-Night's Dream * The Merchant of Venice * As You Like It * The Taming of the Shrew * All's Well that Ends Well * Twelfth Night * The Winter's Tale * King John * King Richard II * The History of Henry IV * King Henry V * King Henry VI * Richard III * King Henry the Eighth * Troilus and Cressida * Coriolanus * Titus Andronicus * Romeo and Juliet * The Life of Timon of Athens * Julius Caesar * Macbeth * Hamlet * King Lear * Othello * Anthony and Cleopatra * Cybeline * Pericles, Prince of Tyre ...read more.