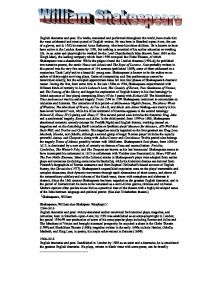 English dramatist and poet. His works, translated and performed throughout the world, have made him the most celebrated and most quoted of English writers. He was born in Stratford-upon-Avon, the son of a glover, and in 1582 he married Anne Hathaway, who bore him three children. He is known to have been active in the London theatre by 1592, but nothing is recorded of his earlier education or working life. As an actor and playwright he worked for the Lord Chamberlain's Men (known from 1603 as the King's Men), the leading company which from 1599 occupied the Globe Theatre, of which Shakespeare was a shareholder. While the plague closed the London theatres (1592-4), he published two narrative poems, the erotic Venus and Adonis and The Rape of Lucrece. Also probably written in this period was his very fine sequence of 154 sonnets (published 1609), some of them addressed to a mysterious 'Dark Lady' and to a beautiful young man. Shakespeare is known to be the author or co-author of thirty-eight surviving plays. Dates of composition and first performance cannot be determined exactly, but the accepted approximate dates fall into four phases of Shakespeare's dramatic career. During the first, from some time in the late 1580s to 1594, Shakespeare experimented with different kinds of comedy in Love's Labour's Lost, The Comedy of Errors, Two Gentlemen of Verona, and ...read more.

Since the 18th century Shakespeare has been regarded as the greatest English dramatist, and in the period of Romanticism he came to be venerated as a semi-divine genius, timeless and universal. Modern opinion often prefers to see him as a practical man of the theatre with a highly developed sense of the links between language and political power. (See also Elizabethan theatre.) 1Shakespeare, William Shakespeare, William also Shakspere /'shaykspi/ 1564-1616 English dramatist and poet: widely-translated author renowned for historical plays, tragedies, and comedies; born in Stratford- upon-Avon; by 1592 was established as an actor-playwright in London; the period 1594-99 saw production of some of his most popular plays including Romeo and Juliet and The Merchant of Venice and brought increased prosperity; he acquired a share in the Globe Theatre (1599) and Blackfriars Theatre (1608); tragedies written in the early 1600s include Hamlet, Othello, Macbeth, and King Lear; in poetry, his major achievement is Sonnets (1609) 1564-1616 English dramatist and poet. Established in London by 1589 as an actor and a dramatist, he is considered the greatest English dramatist. His plays, written in blank verse with some prose, can be broadly divided into lyric plays, including Romeo and Juliet and A Midsummer Night's Dream; comedies, including The Comedy of Errors, As You Like It, Much Ado About Nothing, and Measure For Measure; historical plays, such as Henry VI (in ...read more.

This `darker' period is also reflected in the comedies Troilus and Cressida, All's Well That Ends Well, and Measure for Measure around 1601-04. It is thought that Shakespeare was only part author of Pericles, which is grouped with the other plays of around 1608-11 - Cymbeline, The Winter's Tale, and The Tempest - as the mature romance or `reconciliation' plays of the end of his career. During 1613 it is thought that Shakespeare collaborated with John Fletcher on Henry VIII and Two Noble Kinsmen. He had already retired to Stratford about 1610, where he died on 23 April 1616. He was buried in the chancel of Holy Trinity, Stratford, and within a few years a monument was erected over his grave. For the first 200 years after his death, Shakespeare's plays were frequently performed in cut or revised form (Nahum Tate's King Lear was given a happy ending), and it was not until the 19th century, with the critical assessment of Samuel Coleridge and William Hazlitt, that the original texts were restored. Appreciation of Shakespeare's plays in the present century have become analytical, examining in detail such aspects as language, structure, contemporary theatrical conditions, and the social and intellectual context of his work. His plays were collected and edited by John Hemige and Henry Condell, two of Shakespeare's former colleagues from the King's company, into the First Folio 1623. Later editions were published 1632, 1664, and 1685 as the Second, Third and Fourth Folios, respectively. ...read more.