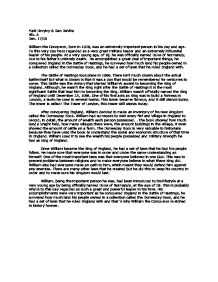 Matt Dmytry & Dan DeVita Blk. A Dec. 17/01 William the Conqueror, born in 1028, was an extremely important person in his day and age. To this very day he is regarded as a very great military leader and an extremely influential leader of his people. At a very young age, of 18, he was officially named Duke of Normandy, due to his father's untimely death. He accomplished a great deal of important things, he conquered England in the Battle of Hastings, he surveyed how much land his people owned in a collection called the Domesday Book, and he had a set of laws that he ruled England with. The Battle of Hastings took place in 1066. ...read more.

This tower became famous, and it still stands today. The tower is called: The Tower of London, this tower still stands today. After conquering England, William decided to make an inventory of his new kingdom called the Domesday Book. William had surveyors to visit every fief and village in England to record, in detail, the amount of wealth each person possessed. . The book showed how much land a knight held, how many villages there were, the amount buildings in the village, it even showed the amount of cattle on a farm. The Domesday Book is very valuable to historians because they have used the book to understand the social and economic structure of that time in England. ...read more.

William also had everyone make an oath to him, which meant they would defend him against any enemies. There are many other laws that he created but he did this to keep his country in order and to make sure his kingdom would last. William, being the important person he was, had been introduced to his lifestyle at a very young age by being officially named Duke of Normandy, at the age of 18. This is probably why is to this day regarded as such a great and powerful leader in his time. His accomplishments were very important as he conquered England in the Battle of Hastings, he surveyed how much land his people owned in a collection called the Domesday Book, and he had a set of laws that he ruled England with and that 's why William the Conqueror is etched in history forever. ...read more.