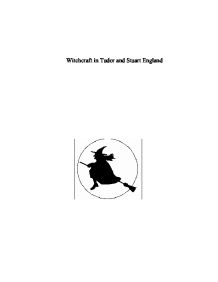 Witchcraft in Tudor and Stuart England

Witchcraft in Tudor and Stuart England Why was there any problem? Today when we think of witches, we think of fairy tale witches on brooms with black cats and warts on the tips of their noses, but then, they would have thought anyone could be a witch. If you were an old lady, often a widow who lived at home alone, people would not automatically go "witch witch". Often people that were accused had a family, also there was a lot of the rich accusing the poor. This is the story of Elizabeth Crossly. Henry Cockfeild told how a poor woman called Elizabeth Crossly came to his house begging. Henry gave her a small amount and sent her away, Elizabeth was not pleased with this amount but she went anyway. The next night Henry's one year old son started having fits three months later he was dead. Henry blamed Elizabeth, At the trial other people said she had bewitched members of there family. Elizabeth was found guilty and hung. Elizabeth's story was not uncommon. Here is a chart to show the number of witchcraft trials in the south east of England from 1560 to 1701. County Number of trials Sussex 16 Hertfordshire 45 Surrey 55 Kent 79 Essex 279 As you can see there were a lot of trials in Essex. Were there any rules? Henry VIII introduced Laws against witchcraft because he thought witches were involved in plots to kill him. ...read more.

The couple knew that a young boy took it but they don't tell because they do not want to be accused of defending the witch. The witch got tried and her sentence was to be burnt at the stake. Her good friends were their shouting insults with the rest of the crowd! The last person to be accused was in 1727 in Essex, she was called Janet Horne and was accused of turning her daughter into a flying horse How do you test a Tudor and Stuart witch? There are a few ways to test a witch. Often before they tested them they would be tortured. A lot of women would have admitted to being witches without being tortured because the thought was so horrifying. Others were tortured and tested. One of the tests was to take a witch, with her hands tied behind her back and lower her into the water of the duck pond. If she floated she was a witch, and if she sank she was innocent - the only problem was that if she sank and was innocent that she would drown anyway. Another test was to take a large pin or bodkin and piece her in her witchmark (mole/wart or birthmark) - if she felt no pain, or did not bleed she was a witch. Another way was to weigh 2 very large bibles then to weigh the suspected witch if they weighed less than the 2 holy books, which most people did especially if they were poor, then they were a witch. ...read more.

There were many other parts of England that had just as many cases, but the records just do not exist any more. In a lot of books they use Essex as an example because the records are so clear. Was the entire witchey thing just foolish? Now we would say yes, it was stupid. It brought about the killing of hundreds of people, but back then with what they believed in, I think I could imagine believing in witchcraft. It must have been very difficult to explain things like why did my baby just die or why has it gone from a lovely sunny day to this storm so lots of people would say witchcraft. Was witchcraft really that big an issue? In the Tudor and Stuart time witchcraft was a very big issue, it was associated with death and pain, no one thought witches were good. Witches would be tried and punished, often the people would be accused maybe because every one hated them. Now we would think if they were a witch, they would use magic to get themselves out of this situation. Today we don't believe in witches but even if we did, it would not be that big an issue but back then they hardly had any science, so they had to come up with ways to explain things. There were particular places that were very witchy and others with no accounts of witchcraft. ...read more.