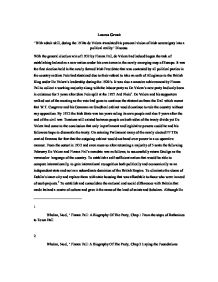 With adroit skill, during the 1930s de Valera translated his personal vision of Irish sovereignty into a political reality. Discuss.

Lauren Grant: 'With adroit skill, during the 1930s de Valera translated his personal vision of Irish sovereignty into a political reality.' Discuss. With the general election win of 1932 by Fianna Fail, de Valera had indeed begun the task of establishing Ireland as a new nation under his own terms in the newly emerging map of Europe. It was the first election held in the newly formed Irish Free State that was contested by all political parties in the country as Sinn Fein had abstained due to their refusal to take an oath of Allegiance to the British King under De Valera's leadership during the 1920's. It was also a massive achievement by Fianna Fail to collect a working majority along with the labour party as De Valera's new party had only been in existence for 5 years after Sinn Fein split at the 1927 Ard Fheis1. De Valera and his supporters walked out of the meeting as the vote had gone to continue the abstention from the Dail which meant that W.T. Cosgrave and his Cumman na Gaedheal cabinet would continue to rule the country without any opposition. By 1932 the Irish State was ten years ruling its own people and also 9 years after the end of the civil war. Tensions still existed between people on both sides of the treaty divide yet De Valera had come to the conclusion that only in parliament and legislative powers could he and his followers hope to dismantle the treaty. ...read more.

a government ruling a country whose exports were being taxed thus leading to decreased international trade and in-turn less revenue for the government to work with. Yet it still took a very high priority for the Fianna Fail administration along with stabilising the increase in emigration. Emigration had been a reoccurring theme in Ireland ever since the time of the Famine but during the crippling affects of the great depression and spilling into the years of Fianna Fail it had increased mainly from rural areas such as the west coast and Donegal. The ever increasing trend of emigration was not a political or social achievement of Fianna Fail it did in fact stabilise the emerging nation's fledgling economy through money sent back by those who lived and worked abroad. This returning money was pivotal in funding the projects and schemes carried out by Lemass in opening up the country's industrial sector such as the Irish sugar company and several other semi-state bodies, so that in the future emigration would not be a necessity to gain paid work for the native Irish. Along with the establishment of several semi-state bodies and an attempt to modernise the nation as a whole, under the Fianna Fail administration was the electrification of the Island. Although the Shannon scheme had been originally under taken by the previous administration, and the contract given to the German owned company Siemens it was ...read more.

De Valera responded to this address in a dignified manner expressing how both Britain and Ireland shared the resolve to fight a foreign power and keep them at bay yet Ireland had been doing it for 700 years. This was a huge political achievement as it showed that De Valera and Fianna Fail had clearly changed their radical view on Irish nationalism and while maintain that both nations were different similarities could be drawn between the two. In conclusion the Fianna Fail administration began as one that had achieved to this day the only overall majority in the Dail and when they left office they were only but a few steps away from the Republic the Party had craved for so long. The electrification of the country, setting up of home industries, economic stability and housing projects all helped to improve the quality of life of Irish citizens, while leading the league of nations, standing their ground on neutrality, suppressing both fascist and nationalist organisations that risked the safety of the country along with the publishing of our own constitution in 1937 were the stand out political achievements of the party's first terms in office. Yes, De Valera achieved his vision of a better Ireland, but he did not do so alone. As part of Fianna Fail, Sean Lemass and Sean McEntee also held considerable sway over party policy and legislation and assisted in the rebuilding of Ireland into a more independant country. ...read more.