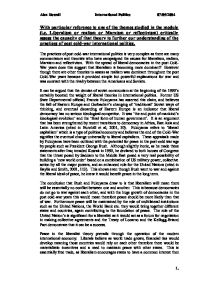 With particular reference to one of the themes studied in the module critically assess the capacity of that theory to further our understanding of the practices of post cold-war international politics.

With particular reference to one of the themes studied in the module (i.e. Liberalism or realism or Marxism or reflectivism) critically assess the capacity of that theory to further our understanding of the practices of post cold-war international politics. The practices of post cold-war international politics is very complex as there are many commentators and theorists who have campaigned the causes for liberalism, realism, Marxism and reflectivism. With the spread of liberal democracies in the post Cold-War years does this suggest that liberalism is becoming more dominant? However though there are other theories to assess as realism was dominant throughout the post Cold-War years because it provided simple but powerful explanations for war and was constant with the rivalry between the Americans and Soviets. It can be argued that the demise of soviet communism at the beginning of the 1990's certainly boosted the weight of liberal theories in international politics. Former US State Departmental official, Francis Fukuyama has asserted this claim, and believes the fall of Eastern Europe and Gorbachev's changing of 'traditional' Soviet ways of thinking, and eventual discarding of Eastern Europe is an indicator that liberal democracy has no serious ideological competitor. It was 'the end point of mankind's ideological evolution' and the 'final form of human government'. It is an argument that has been strengthened by recent transitions to democracy in Africa, East Asia and Latin America (cited in Burchill et al, 2001, 30). ...read more.

Equally there will be problems with the concept of free trade and relying on other states and neighbours as there are many examples where nationalities have not got on with there territorial neighbours such as the Balkan's and Kurd's. It should also be noted that there have been many more conflicts during the post Cold-War period indicating that the liberalist argument could well be undermined. There have been conflicts in the Persian Gulf, the Balkans and demonstrates the volatility between nations and that war is still prominent. On the other hand, we must realise that in fact none of these countries are democracies, but nonetheless this is still a little disconcerting in maintaining peace in the world order. Similarly the notion of free trade has been criticised by Marxists as free trade would be of benefit to the capitalist economies and free trade in the 1930's especially for Britain benefited the aristocrats and the landed interests. They argue that America wanted to take up the role that Britain once had and wanted to do this by opening the regions of the world. Marxists have the right to condemn this approach as free trade has never been embraced as enthusiastically in developing societies as it has by the elites in wealthy industrial states. They tend to see free trade as a weapon used by dominate players to open up societies to resource exploitation, foreign investment, access to raw materials and the repatriation of profits (cited in Burchill, 2001, 54). ...read more.

This is certainly apparent in many areas of the world as you could put the UK and the USA very easily in the first bracket whilst as Kaplan said countries such as Africa are evidence of being in the latter. Liberalists may try and dispute this point and claim that countries such as Africa are only anarchical because they are not liberal democracies and if they were then this would not be the case as they would engage in free trade and the Hobbesian life alluded to above would not be evident as they would have a materialistic motive to trade and maintain peace. It obvious that liberalism is extremely apparent in the post Cold-War years and equally had a momentous effect. The fact so many countries have the made the transition to a liberal democracy surely strengthens Fukuyama's claims that liberalism is the dominant ideology in the post Cold-War years. This view is reinforced by President George Bush who talked of using the United Nations to maintain peace and try and prevent conflict between countries and the many countries now ruled by civilians and not militaries. Significantly too, the growth of globalisation has undermined the nation-state and meant that the creation of creating a market society is in sight. Globalisation has meant that now there are very few obstacles to international trade and the decline of national economic sovereignty shows that the influence of the state is briskly deteriorating. It is therefore easy to see what liberalism has achieved in the post Cold-War years and what is still trying to attain. ...read more.