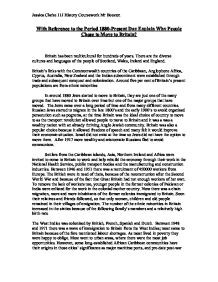 With Reference to the Period 1880-Present Day Explain Why People Chose to Move to Britain?

With Reference to the Period 1880-Present Day Explain Why People Chose to Move to Britain? Britain has been multicultural for hundreds of years. There are the diverse cultures and languages of the people of Scotland, Wales, Ireland and England. Britain's links with the Commonwealth countries of the Caribbean, Anglophone Africa, Cyprus, Australia, New Zealand and the Indian subcontinent were established through trade and subsequent conquest and colonization. Around five per cent of Britain's present populations are from ethnic minorities In around 1880 Jews started to move to Britain, they are just one of the many groups that have moved to Britain over time but one of the major groups that have moved. The Jews came over a long period of time and from many different countries. Russian Jews started to migrate in the late 1800's and the early 1900's to avoid organised persecution such as pogroms, at the time Britain was the ideal choice of country to move to as the transport revolution allowed people to move to Britain and it was a was a wealthy nation with an already thriving Anglo Jewish community. ...read more.

Between 1948 and 1971 there was a wave of immigration to Britain from the West Indies; most came to Britain because of the fore mentioned labour shortages. As most lived in poverty they were happy to oblige. Most went to urban areas, where there were the most job opportunities. However, some long-established African Caribbean communities have their origins in those cities' significance as major maritime ports, and pre-date post-war black immigration. During the late 1950s and into the 1970s, 'immigrant' meant 'black person', though the majority of people entering Britain to settle here were white. After 1945 most immigrants in Great Britain came from Ireland. Till about 1980 85 0379 inhabitants of England were born in Ireland. 32% of them lived in the south-east of England and 32% lived in the area of London. The main reason for the Irish to immigrate was the search for work. Because of the influx of cheap labour force, Great Britain offered Ireland unlimited freedom of movement Roma gypsies and travellers also came to Britain after World War 2 many came to flee persecution and abuse of their human rights. ...read more.

Every year millions of Africans flee wars in their own country and poverty and persecution. Many take desperate measures to flee their homelands and make their way to Britain such as the 58 illegal immigrants found suffocated inside a lorry at Dover in June 2000. This pattern runs through many of the earlier groups as people seem to view Britain as a land of hope and promise such as the people who moved to Britain after World War 2. although most groups have originally left their own countries for many different reasons they all seem to have similar reasons for choosing Britain over other European countries, because of its image of tolerance and its historical nature of a multicultural society stretching back to the middle ages with Normans, Celts, angles, Saxons and Jutes but to name a few. Also for its image of wealth and prosperity that people feel they will gain by moving to the U.K. Jessica Clarke 11J History Coursework Mr Beeston ...read more.