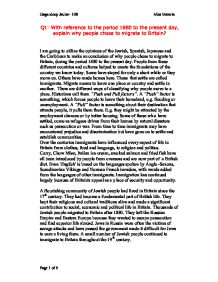 With reference to the period 1880 to the present day, explain why people chose to migrate to Britain?

Q1: With reference to the period 1880 to the present day, explain why people chose to migrate to Britain? I am going to utilize the opinions of the Jewish, Spanish, Japanese and the Caribbean to make an conclusion of why people chose to migrate to Britain, during the period 1880 to the present day. People from these different countries and cultures helped to create the foundations of the country we know today. Some have stayed for only a short while or they move on. Others have made homes here. Those that settle are called immigrants. Migrate means to leave one place or country and settle in another. There are different ways of classifying why people move to a place. Historians call them "Push and Pull factors". A "Push" factor is something, which forces people to leave their homeland, e.g. flooding or unemployment. A "Pull" factor is something about their destination that attracts people, it pulls them there. E.g. they might be attracted by the employment chances or by better housing. Some of those who have settled, come as refugees driven from their homes by natural disasters such as persecution or war. From time to time immigrants may have encountered prejudice and discrimination but have gone on to settle and establish communities. Over the centuries immigrants have influenced every aspect of life in Britain from clothes, food and language, to religion and politics. Curry, Chow Mien, Italian ice cream, smoked salmon and fried fish have all been introduced by people from overseas and are now part of a British diet. Even 'English' is based on the languages spoken by Anglo-Saxons, Scandinavian Vikings and Norman French invaders, with words added from the languages of other immigrants. Immigration has continued largely because of Britain's appeal as a place of security and opportunity. A flourishing community of Jewish people had lived in Britain since the 17th century. ...read more.

There were keenly aware that the public at large could become hostile if the refugees were seen to be costing the taxpayer money and a threat to other people's jobs. A number of organisations in England tried hard to help Jews suffering at the hands of the Nazis. After world war one many refugees came to Britain because their homes had been destroyed and were seeking better life overseas. The Japanese were very orientated people. They came to Britain because; they wanted to invest in the ship building trade. The short-term effect was, it progressed Britain's industrial ship building trade. The long-term effect was very prehistoric and tedious. Another group that came was the Spanish. They came as the 1936 civil war had caused many interruptions and disagreement between religious groups. Spanish Catholics found hope and freedom in Britain because they didn't endure the conditions of war in Britain. The move was a perilous one because, the immigrants didn't know if the move was right or not. There were two major reasons for people immigrating to Britain after 1945. They came either as refugees from the war in Europe or they came from the British colonies and the commonwealth to find work. The British government accepted both these groups, largely because there was a labour shortage after the war. After the Second World War, millions of people had lost their homes because of bombing or fear for their lives. Towns and cities had been traumatized. A cold war had begun between communist Eastern Europe and the capitalist countries of Western Europe, as well as the USA. Countries in Eastern Europe were taken over by communist governments in the west. Many people in Eastern Europe didn't want to live under a communist government because; they had very different ideas about equality and freedom. The largest of the refugee groups to settle in Britain after 1945 was the Polish. ...read more.

When Britain experienced the post-war economic boom, which lasted right up until the end of the 1970s, there were plenty more jobs to be had, and more and more migrant workers from India, Pakistan and Bangladesh came to join these early paths. Some of the immigrants had professional qualifications. Many were doctors. However, the vast majority of those who came were mostly unskilled. So jobs like Wolf's rubber factory in Southall, iron foundries in Birmingham, steelworks in Sheffield and Scunthorpe, were on offer. The vast majority of migrants from South Asia were from the north of the sub-continent: Gujarat and Punjab in India, Mirpur in Pakistan, and Sylhet in Bangladesh. The reasons for the majority of migrants originating from only a few of the communities in India are directly linked to settlement. Released soldiers, mostly from Punjab and Gujarat, who settled in England from the early 1900s became the bridgeheads for the flow of migrants who arrived in Britain from the 1960s. Famously, Sylhettis were often ship's cooks; many of them went on to work in the 'Indian' restaurants, which they still dominate today. When the post-war industrial boom created a huge demand for unskilled labour, those who had already obtained a foothold in Britain encouraged their male relatives to come to Britain, guaranteeing them work and support. I have discussed all the variable reasons for the Jewish, Spanish, Japanese, Asian and Caribbean people to immigrate to Britain. I said the change over time in the Jewish settlement. Before1905 the reason for their move was persecution and discrimination but after in was mainly economic reasons. Different groups emigrate for different reasons. The Spanish moved because they wanted to get away from war, however the Japanese were 'pulled' because they wanted to invest in the ship building trade. Mainly all groups share 'push' and 'pull' factors. This was because mostly all groups were pulled because of the attraction and opportunity in Britain and all groups except the Japanese were pushed because, their country weren't serving them right. Gagandeep Jauhar- 10B Miss Mataria Page 1 of 8 ...read more.