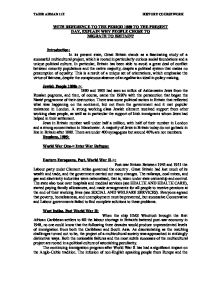 With Reference To the Period 1880 To the Present day, explain why people chose to migrate to Britain?

WITH REFERENCE TO THE PERIOD 1880 TO THE PRESENT DAY, EXPLAIN WHY PEOPLE CHOSE TO MIGRATE TO BRITAIN? Introduction: In its present state, Great Britain stands as a fascinating study of a successful multicultural project, which is rooted in particularly curious social foundations and a unique political culture. In particular, Britain has been able to avoid a great deal of conflict between minority populations and the native majority, despite a political system that makes no presumption of equality. This is a result of a unique set of orientations, which emphasise the virtue of fairness, despite the conspicuous absence of an egalitarian ideal in policy making. Jewish People 1880s->: 1880 and 1905 had seen an influx of Ashkenazim Jews from the Russian pogroms, and then, of course, came the 1930's with the persecution that began the Nazis' programme of their destruction. There was some political racism in Britain that reflected what was happening on the continent, but not from the government and it met popular resistance in London. ...read more.

Everyone agreed that poverty, homelessness, and unemployment must be prevented, but successive Conservative and Labour governments failed to find complete solutions to these problems. West Indies, Post World War II: When the ship HMS Windrush brought the first African Caribbean settlers to fill the labour shortage in Britain's battered post-war economy in 1948, no one could know that the following three decades would produce unprecedented levels of immigration from both the Caribbean and South Asia. As disorientating as the resulting challenges turned out to be, the project of a multicultural society was approached in strikingly distinctive ways. Both the noticeable failures and the most subtle successes of the multicultural project are rooted in a political culture of astonishing peculiarity. The continuing immigration program after World War II has had a significant impact on the Anglo-Celtic tradition. The infusion of non-English speaking people from Europe and the Middle East in the surge of new produced a settlers that followed the end of World War II more diverse population. ...read more.

Communal tensions between Hindus and Muslims erupted into violence which the British could not quell and in which many thousands died. Indian independence initiated a wave of decolonisation, first in Asia and later in Africa. Many of the newly independent countries chose to remain in the Commonwealth, which came after the war to be seen as a flexible, multiracial community and as a vital means through which Britain could maintain its influence in the World Conclusion: Britain is now a truly multicultural society, with 40 per cent of the population migrants or their children. Successive British governments have introduced measures to cater for the diverse population. In 1989, the Government outlined its National Agenda for a Multicultural Britain to provide a $20 million program aimed at acknowledging the cultural diversity of the British community, strengthening support measures such as English language programs for those of non-English speaking background, and improving processes for recognising overseas qualifications in the workplace. It also introduced a range of initiatives in the areas of community services and health, local government, consumer education and issues affecting migrant women. . TAHIR AHMAD 11E HISTORY COURSEWORK ...read more.