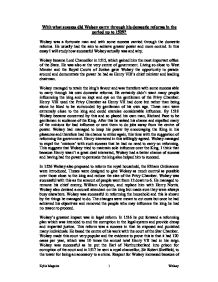 With what success did Wolsey carry through his domestic reforms in the period up to 1529?

With what success did Wolsey carry through his domestic reforms in the period up to 1529? Wolsey was a fortunate man and with some success carried through the domestic reforms. He usually had the aim to achieve greater power and more control. In this essay I will study how successful Wolsey actually was and why. Wolsey became Lord Chancellor in 1515, which gained him the most important office of the State. He was also at the very centre of government. Living so close to West Minster and the Royal Courts of Justice gave Wolsey the opportunity to parade around and demonstrate the power he had as Henry VIII's chief minister and leading chairman. Wolsey managed to retain the king's favour and was therefore with some success able to carry through his own domestic reforms. He certainly didn't want many people influencing the king and so kept and eye on the gentlemen of the Privy Chamber. Henry VIII used the Privy Chamber as Henry VII had done but rather than being alone he liked to be surrounded by gentlemen of his own age. These men were extremely close to the king and could exercise considerable influence. By 1518 Wolsey became concerned by this and so placed his own man, Richard Pace to be gentlemen in audience of the King. ...read more.

Wolsey also had some success with the Court of Chancery as he managed to increase the work. Wolsey has been credited with making a major contribution to English law through his decisions, which created precedents. He managed to establish a permanent judical committee dealing with cases brought by the poor, who he favoured, which created enemies of richer people. Wolsey wanted to see courts available for the poor and weak, since they stood little chance against the rich and strong in common law courts where large sums of money was required to succeed. Yet within these courts many honest people were put on trial. A contemporary source, the Chronicle of Edward Hall dated 1526 explains how Wolsey letting the poor people have a court led to innocent people being punished. 'The poor people perceived that he punished the rich, then they complained without number, and brought many an honest man to trouble and vexation.' Here I think Wolsey achieved his objectives and also achieved successfully reforming the Court of Chancery. Wolsey managed to reform administration and finance with some success. He built up the Kings affinity in each locality by appointing the kings' servants or his own to key country positions. In local government he gained his 'centralising drive' with some accomplishment as the local officials responded more rapidly and efficiently to royal instructions. ...read more.

He said, 'If I had served God as diligently as I have done the King...' This suggests that he didn't pay enough attention it, as he would have liked. However, he did pave the way for what happened in the 1530s, as he was involved in all aspects of the church. Churchmen became used to orders and enquiries from the crown, but the disadvantages of this was that their independence was reduced and therefore it became harder to re assert in time of a crisis. In conclusion, Wolsey did carry through some of his domestic reforms with some success. The only reason some of them weren't successful is because of how he reacted in certain situations, for example the enclosures. Wolsey was a very powerful man and knew how to persuade the King, and this was usually how he achieved success, the people that got in the way were his enemies. Even though he did have some failures he did carry on, but usually for his own interest, to gain full power. In certain ways he did improve things for others, he especially tried to improve things for the poor. I think this is because he used to be poor himself and so wanted to make a better life for others. Overall Wolsey did carry through domestic policies with some success, even if he was trying to fulfil his own objectives. Kylie Maguire 1 Wolsey ...read more.