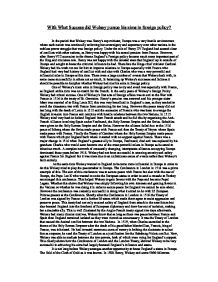 With What Success did Wolsey pursue his aims in foreign policy

With What Success did Wolsey pursue his aims in foreign policy? In the period that Wolsey was Henry's top minister, Europe was a very hostile environment where each nation was continually enforcing her sovereignty and supremacy over other nations in the ruthless power struggle that was foreign policy. Under the rule of Henry IIV England had steered clear of conflicts with other nations, as Henry was happy with his annual pension from France. However, after Henry VIII accession to the throne England's Foreign policy became much more important part of the King and ministers role. Henry was not happy with the isolated state that England lay in outside of Europe and sought to boost the minimal influence he had. Therefore the Kings chief minister Cardinal Wolsey had his work cut out for him to improve relations in Europe especially with France who England had very bad history of conflict with and also with Charles who was a very powerful and influential ruler in Europe at this time. There were a large number of events that Wolsey dealt with, in some cases successfully in others not so much, In balancing up Wolsey's successes and failures it should be possible to decipher whether Wolsey had met his aims in foreign policy. ...read more.

However Wolsey had ulterior motives once again for this meeting. The event was very lavish indeed for a temporary affair. The tents and the costumes displayed so much cloth of gold, an expensive fabric woven with silk and gold thread, that the site of the meeting was named after it. A temporary palace was built for Henry and was painted to look even more elaborate. This was the perfect opportunity for England to show off its prestige and wealth to the French King who would then hopefully take England more seriously as a major power in Europe. Although England impressed greatly with the high levels of prestige that they displayed the meeting didn't make too much political change and soon after the relationship between France and England worsened greatly by the alliance Wolsey made with Charles, which was explicitly Anti-French. Every detail of the Field of the Cloth of Gold was organised by Wolsey. He made sure that everything went as planned, although the consequences were not huge in political terms, it served well as an opportunity for England to show off her wealth and prestige and in this sense Wolsey was successful in reaching this aim. With both France and Spain vying for England's allegiance, Wolsey was given the opportunity to chose the ally which best suited his policies. ...read more.

is often regarded as Wolsey's finest moment, but it was ultimately an excuse for England to assert some influence in Europe, and its wishes to secure peace were abandoned within a year. This shows that clearly Wolsey did not have many specific aims to follow when foreign policy was concerned. However the aims which he did have to follow e.g. avoid war with France and boost England into the top tables of Europe he was very successful with at first in the period of 1518-1522. The War with France was a major turning point in the success of Wolsey's success, The war was a complete disaster and relations with France were awful. What's worse is that the abandonment of Charles from the English side simply left England with no major support in Europe and they were then isolated once again. It seems clear that Wolsey may have been unlucky with some of the turns of events, for example with the death of both Louis XII and Ferdinand who Henry had good relations with, came the accession of Charles and Francis who would be much more difficult to please. Wolsey showed he had the capability of acting successfully in a diplomatic manner and did so on numerous occasions but his lack of experience and his own self interest conflicting with the interests of Henry and England meant that in the long run Wolseys Foreign Policy was a failure. ...read more.