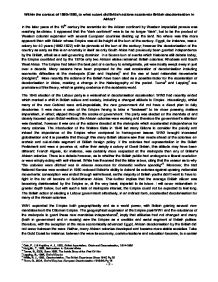 Within the context of 1880-1980, to what extent did British actions accelerate British decolonisation in Africa?

Within the context of 1880-1980, to what extent did British actions accelerate British decolonisation in Africa? In the later years of the 19th century the scramble for the African continent by Western imperialist powers was reaching its climax. It appeared that the "dark continent" was to be no longer "dark", but to be the product of Western colonial expansion with several European countries dividing up the land. No where was this more apparent than with Britain whose Empire was at its height at the turn of the century. Egypt, for instance, was a colony for 40 years (1882-1922) with its pinnacle at the turn of the century; however the decolonisation of the country as early as this is an anomaly in itself as only South Africa had previously been granted independence by the British, albeit as a self-governing dominion. In a bizarre turn of events which historians still debate today, the Empire crumbled and by the 1970s only two African states remained British colonies: Rhodesia and South West Africa. The Empire had taken the best part of a century to amalgamate, yet was mostly swept away in just over a decade. Many reasons have been proposed for the vast acceleration of decolonisation including economic difficulties at the metropole (Cain and Hopkins)1 and the rise of local nationalist movements (Hodgkin)2. More recently the actions of the British have been cited as a possible factor for the acceleration of decolonisation in Africa, marking a change in the historiography of the period. Turner3 and Lapping4 are promoters of this theory, which is gaining credence in the academic world. The 1945 election of the Labour party is a watershed in decolonisation acceleration. WW2 had recently ended which marked a shift in British culture and society, including a changed attitude to Empire. Interestingly, whilst many of the new Cabinet were anti-imperialists, the new government did not have a direct plan to fully decolonise. ...read more.

There are two key elements of the crisis which paved the way to said factors: the deception employed by the imperialist powers of Britain and France, plus the apparent overreaction to a simple act of nationalisation by a head of state. Both these factors led to the reputations of the countries involved and international relations been damaged, as well as a decrease in trade. Britain was the driving force behind the attack hence she was particularly wounded with the political and economic fallout: for one, the special relationship with the United States was harmed (Secretary of State John Foster Dulles claimed the British government had explicitly "lied to [him]"17) and, more critically for this inquiry, her reputation within the African continent was damaged. Britain looked small and corrupt, a mere shadow of her former colonial self; she was attempting to throw her imperialist weight around in a world which it didn't seem to fit. Nasser had successfully stood up to the Western powers and won, thus undermining Britain and France, plus providing inspiration to the many oppressed colonies. However, it is possible that the reaction did not provoke the level of international condemnation that is contemporarily considered, showing a difference in historiography. To the African colonies, former British dominions that had experienced colonialism and anti-imperialist powers such as the USA, then yes, it is likely that Britain's reputation was damaged. However, to other imperialists it is possible that the government simply appeared to be standing firm with a tyrant. World War 2 had been won only 11 years prior, hence the memory of what tyrannical dictators can achieve was still fresh in most leaders' minds. Eden may have appeared noble and selfless, "destroying not just his own political career but a carefully-crafted reputation built up over more than 20 years"18 for the greater good of a safer world, or at least a more economically stable Great Britain. ...read more.