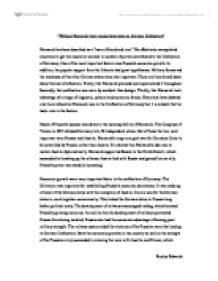 "Without Bismarck there would have been no German Unification" Bismarck has been described as a "man of blood and iron." He effectively manipulated situations to get the results he wanted. A number of points contributed to the Unification of Germany. One of the most important factors was Prussia's economic growth. In addition, the popular support from the Liberals had great significance. Military forces and the weakness of the other German states were also important. There are three broad ideas about German Unification. Firstly, that Bismarck planned and implemented it throughout. Secondly, that unification was more by accident than design. Thirdly, that Bismarck took advantage of a range of linguistic, cultural and economic forces. Historians have debated over how influential Bismarck was in the Unification of Germany but it is evident that he had a role in the factors. ...read more.

Prussia also had the economic advantage of having great military strength. The railway system aided the victories of the Prussian wars that lead up to German Unification. Both the economic growths in the country as well as the strength of the Prussian army succeeded in winning the wars with Austria and France, which leaded to the unification. It was the awareness of Prussia's strength at this time that gave Bismarck the confidence in asserting claims in Austria and France. The Liberals shared the same aim as the Prussian King at that time and that was for German Unification to be under Prussian leadership. The Liberals wanted great economic factors such as free trades. The Prussian King also wanted this, as it would enlarge his empire. Both the King and the Liberals agreed that the army should be expanded but they disagreed with how it should be run. ...read more.

Bismarck had the power and influence to change things. Prussia benefited greatly from the weakness of the other German states. Austria's empire was weak. They did not have a strong military, had economic problems as they were still very much agriculturally based and had political difficulties as they did not have a strong government. Bismarck benefited greatly from Austria's downfall as it strengthened his own country. Bismarck was a key figure for implementing the Unification of Germany. He was a naturally skilled leader and had clear aims and ideas of the actions Prussia should take to be in control of Germany. Bismarck was intelligent and cunning and was able to show off Prussia's strengths whilst at the same time focus on other countries weaknesses. He was also able to isolate Prussia's rival state Austria. It can not be said however, that German Unification wouldn't have gone ahead without him as most of the events were manipulated by him rather than created. It is possible that the German Unification could have happened without him. Kayley Edwards ...read more.