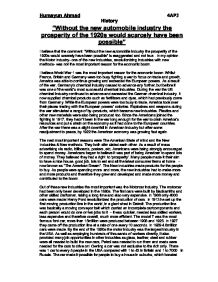 &quot;Without the new automobile industry the prosperity of the 1920s would scarcely have been possible&quot;

In 1929 4.8million cars were made. By the end of the 1920s the motor industry was the largest industry in the USA. As well as employing hundreds of thousands of workers directly, it also provided many job opportunities in other industries as glass, leather, steel and rubber were all needed to build the new cars, Petrol was needed to run them and roads were needed for the cars to drive on! Owning a car was not exclusive to the rich only. There was 1 car to every 5 people in the USA compared with 1 to 43 in Britain and 1 to 7000 in Russia. The car made it possible for people to buy a house in suburbs, which boosted house building! It also boosted the growth of many other small firms from hot dog stands and advertising billboards to petrol stations and holiday resorts. It also made trading between states and local businesses easier! Republican policies were the next most important factor contributing to the boom. The Republican Policy of "Laissez-faire" - Leave it alone - was basically staying out of the ordinary people's affairs and allowing businesses to develop and grow naturally. The Isolationism policy that the republican government had was basically - "Stay out of international affairs (that do not concern or involve the USA)". ...read more.