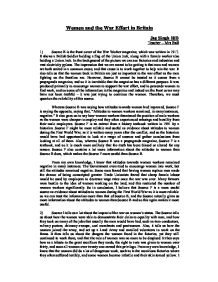 Women and the War Effort in Britain.

Women and the War Effort in Britain Jas Singh 10D Teacher - Mrs Ball 1) Source B is the front cover of the War Worker magazine, which was written in 1917. It shows a British Soldier holding a flag of the Union Jack, along with a female worker also holding a Union Jack. In the background of the picture we can see factories and industries and vast electricity pylons. The impression that we are meant to be getting is that men and women are both united in a common cause, and that cause is to work together to help win the war. It also tells us that the women back in Britain are just as important to the war effort as the men fighting on the frontline are. However, Source B cannot be trusted as it comes from a propaganda magazine, and so it is inevitable that the magazine has a different purpose. It was produced primarily to encourage women to support the war effort, and to persuade women to find work, and so some of the information in the magazine and indeed on the front cover may have not been truthful - it was just trying to convince the women. Therefore, we must question the reliability of this source. Whereas Source B was saying how attitudes towards women had improved, Source F is saying the opposite, saying that, "Attitudes to women workers remained, in many instances, negative." ...read more.

Source C tells us how the role of women had changed from the old "for men must work and women must weep." Women had proved successfully that they could do her share in times of crisis and that her contribution to the war effort was equally as vital as the men's contribution. Source I tells us how women had demonstrated practically their claim to equality with men, as they took on all the jobs that men had done in the past, and even set up their own Land Army. It goes on to tell us how even through danger and very risky hazards, the women continued to work in the munitions factories, and that now the role of women was no longer to be despised as their efforts and transformed their roles in society. Source J, 'The Duchess of Duke Street,' shows us how women of all classes united to help to war work, such as holding buffets for soldiers. In this instance, the women converted houses into hospitals for the sick. This demonstrates how the women were united in a common cause and how they put in lots of effort in aid of the war cause. However, we have to question the reliability of these sources. Source A is taken from The Daily Chronicle newspaper, from the 19th July 1915. At this time in the war, the British Government had put newspaper censorship into operation, which meant that the government had complete control over everything that the newspapers wrote. ...read more.