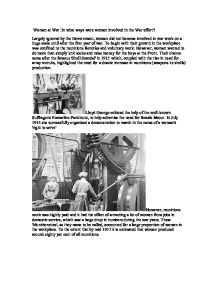 Women at War :In what ways were women involved in the War effort

Women at War :In what ways were women involved in the War effort? Largely ignored by the Government, women did not become involved in war work on a huge scale until after the first year of war. To begin with their growth in the workplace was confined to the munitions factories and voluntary work. However, women wanted to do more than simply knit socks and raise money for the boys at the Front. ...read more.

In July 1915 she successfully organised a demonstration to march in the name of a woman's 'right to serve' However, munitions work was highly paid and it had the effect of attracting a lot of women from jobs in domestic service, which saw a large drop in numbers during the war years. These 'Munitionettes', as they came to be called, accounted for a large proportion of women in the workplace. ...read more.

The largest influx of women into the workplace was in the transport industry where they took on work as conductresses (and sometimes, as drivers), on buses, trams and underground trains. '...by February 1917 the total number of bus conductresses leapt from the timorous handful of the previous year to about 2,500, some half of whom, it was said, were former domestic servants.' A great number of women had come to work in fields as varied as commerce, administration, education, forestry and agriculture. The 'Women's Land Army' alone employed over 260,000 women as farm labourers. ...read more.