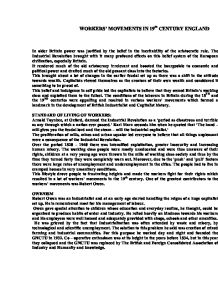 WORKERS' MOVEMENTS IN 19th CENTURY ENGLAND In older Britain power was justified by the belief in the inevitability of the aristocratic rule. The Industrial Revolution brought with it many profound effects on this belief system of the European civilization, especially Britain. It rendered much of the old aristocracy irrelevant and boosted the bourgeoisie to economic and political power and drafted much of the old peasant class into the factories. This brought about a lot of changes in the earlier feudal set up as there was a shift in the attitude towards wealth. Capitalists viewed themselves as the creators of their own wealth and considered it something to be proud of. This belief and indulgence in self pride led the capitalists to believe that they owned Britain's working class and exploited them to the fullest. The conditions of the laborers in Britain during the 18TH and the 19TH centuries were appalling and resulted in various workers' movements which formed a landmark in the development of British Industrialist and Capitalist history. STANDARD OF LIVING OF WORKERS: Arnold Toynbee, at Oxford, damned the Industrial Revolution as a 'period as disastrous and terrible as any through which a nation ever passed.' ...read more.

By 1829 the 'political unions' that were to play an important role in mobilizing public opinion were being established and reform was the major issue in the election that followed the death of George IV in 1830. THE FACTORY MOVEMENT The factory movement was a part of the greater struggle over the 'condition of England'. The main aim of the movement was to regulate the factory hours and improve the working conditions for the factory operatives. The campaign achieved a great deal as the government became heavily involved in regulating the factory hours and factory conditions while most other occupations were still unregulated. The working class support for reform came mainly from the factory districts themselves. The movement had far greater effects than expected and by 1850 the factory operatives were working less than most of the workers in the week. All of this advance can not be attributed to factory reform alone but its contribution to the movement is significant. THE ANTI - POOR LAW CAMPAIGN The ultimate purpose of the anti poor law campaign was repeal of the legislation of 1834 and this is what is failed to achieve. ...read more.

In 1880, the Employers liability act was passed which made the employer responsible for any work place accidents. There were also in these years several piecemeal legislative advances affecting safety and working conditions. The number of mines and factory workers was increased, and the first working class factory inspector began his rounds in 1882. In 1884, the Reform act was passed again which enfranchised even the rural workers. 1889 - 91 marked the coming of "New Unionism'. CONCLUSION Despite industrialization, urbanization and the widening of the gulf between employers and workers, the persistence of harmonious class - relations and the remarkable slow development of working class consciousness are two of the major themes of 19Th C British labour history. The acts passed during the 19th Century prove to be vital till date. The labour force of 1815 presents a remarkable contrast with that of a century later. There were fewer children at work and workers had moved to the towns and into industrial and tertiary employment. The working week was shorter and, the workplace less dangerous and the Urban environment much healthier, the work force was larger more productive and better paid. Thus, due the various reform acts and workers' movements the overall conditions of the British Industrial Society improved and proved profitable for both the employers and the workers. ...read more.