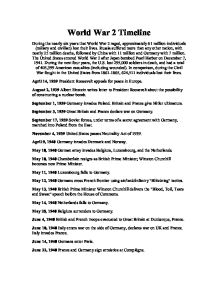 World War 2 Timeline During the nearly six years that World War 2 raged, approximately 61 million individuals (miliary and civilian) lost their lives. Russia suffered more than any other nation, with nearly 25 million deaths, followed by China with 11 million and Germany with 7 million. The United States entered World War 2 after Japan bombed Pearl Harbor on December 7, 1941. During the next four years, the U.S. lost 295,000 soldiers in death, and had a total of 405,399 American casualties (including wounded). In comparison, during the Civil War fought in the United States from 1861-1865, 624,511 individuals lost their lives. April 14, 1939 President Roosevelt appeals for peace in Europe. August 2, 1939 Albert Einstein writes letter to President Roosevelt about the possibility of constructing a nuclear bomb. September 1, 1939 Germany invades Poland. Britain and France give Hitler ultimatum. September 3, 1939 Great Britain and France declare war on Germany. September 17, 1939 Soviet forces, under terms of a secret agreement with Germany, marched into Poland from the East. November 4, 1939 United States passes Neutrality Act of 1939. ...read more.