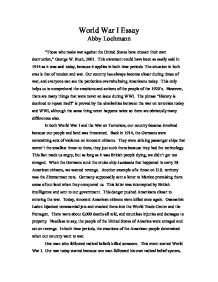 World War I Essay Abby Lochmann "Those who make war against the United States have chosen their own destruction," George W. Bush, 2001. This statement could have been as easily said in 1914 as it was said today, because it applies in both time periods. The situation in both eras is that of tension and war. Our country has always become closer during times of war, and everyone can see the patriotism overwhelming Americans today. This only helps us to comprehend the emotions and actions of the people of the 1920's. However, there are many things that were never an issue during WWI. The phrase "History is destined to repeat itself" is proved by the similarities between the war on terrorism today and WWI, although the same thing never happens twice so there are obviously many differences also. In both World War I and the War on Terrorism, our country became involved because our people and land was threatened. Back in 1914, the Germans were committing acts of violence on innocent citizens. They were sinking passenger ships that weren't the smallest threat to them, they just sunk them because they had the technology. This fact made us angry, but as long as it was British people dying, we didn't get too enraged. ...read more.

Our president didn't even get the most votes! What does that say for our country's spirit? Before WWI, similar events were happening. People didn't really feel like one whole country, they were many people from many countries living in one place. Men and women's lives were consumed solely with work, they did not have room for patriotism. When the wars started, however, everyone found their sense of nationalism and wore it proudly. We are obviously not fighting the same war today that we did almost a hundred years ago, regardless of how many similarities there are. One extremely important difference is the enemy. In World War I, things were so much simpler. We had exact countries to send our troops into and we knew who to kill and who was fighting and what to expect. We were able to direct our anger at a certain group of people, and it was easy to know who to ally ourselves with. Today, we don't even have a country to fight against! We send our troops into land that might be occupied by the government that we are fighting against. Our country is now engaged in what is probably the most confusing and difficult war ever undertaken. We can't know who are our true allies because even if the government believes in what we want, the people seem to follow our enemies. ...read more.

The fact that both wars were started in almost the same way demonstrates the repetition of history. Because loss of innocent civilians and threats at home caused people to become angry and want to enter a war, we know that all wars are similar in some ways. Another way that all wars are similar is that everyone in the country suddenly has an overwhelming sense of patriotism. However, we haven't fought the same war twice! We aren't even fighting even close to the same style of war that we fought in the early 1900's. Our technology is completely different and so is our enemy. With those differences, how could the wars possibly be completely the same? Since I know that history repeats itself in this instance, I truly understand why we are expected to learn history. I never really believed that there was actually a way to use history in your everyday life until I learned about WWI. I have developed an actual interest in history and I think that it is amazing that we can really use what we learn and apply it to something that affects us. I wish that other people understood what I have come to grips with. If that was so, maybe we could really end wars. All wars are ended with peace agreements. Why can't we just skip the killing and end all conflicts in the conference room? ...read more.