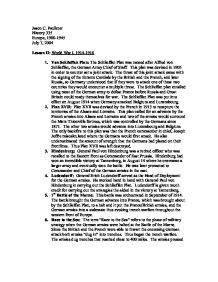 Jason C. Faulkner History 335 Europe, 1900-1945 July 7, 2004 Lesson II: World War I, 1914-1916 1. Von Schlieffan Plan: The Schlieffan Plan was named after Alfred von Schlieffan, the German Army Chief of Staff. This plan was devised in 1905 in order to counter act a joint attack. The threat of this joint attack came with the signing of the Entante Cordiale by the British and the French, and later Russia, so Germany understood that if they were to attack one of these two countries they would encounter a multiple threat. The Schlieffan plan entailed using most of the German army to defeat France before Russia and Great Britain could ready themselves for war. The Schlieffan Plan was put into effect on August 1914 when Germany attacked Belgium and Luxembourg. 2. Plan XVII: Plan XVII was devised by the French in 1913 to recapture the territories of the Alsace and Lorraine. This plan called for an advance by the French armies into Alsace and Lorraine and two of the armies would surround the Metz-Thionville fortress, which was controlled by the Germans since 1871. The other two armies would advance into Luxembourg and Belgium. The only backfire to this plan was that the French commander in chief, Joseph Joffre miscalculated where the Germans would first attack. ...read more.

II. Answer all of the following: 1. The first year of World War I one riddled with mostly plans of attacking. One of the most important plans of the time was Germany's von Schlieffan Plan. This plan was named after the German army chief of Staff, Alfred von Schlieffan. This plan involved swiftly attacking the French army before Russian and Great Britain had a chance to fortify their armies. In order to carry out this plan Germany was forced to place a large percentage of its forces into the eastern front in order to have enough arms to defeat the French within the required timely fashion. This plan eventually failed because the German officer miscalculated the amount of time it would take for the British and Russian armies to fortify themselves. In a quick amount of time the British armies were ready with aid along with the Russian army and they were able to put a halt to the German invasion. This was particularly evident during the First Battle of the Marne. Although the French forces were pushed back the French armies evaded a defeat and both armies dug in and began using the strategy of the trench warfare.2 The next strategically thought out plan was Plan XVII. This plan was devised by the French to take the cities of Lorraine and Alsace. ...read more.

This event occurred during a British attempt to blockade the Germans. During this stalemate the German vice Admiral Reeinhard Scheer developed a plan to weaken the British blockade. To succeed in this endeavor Scheer called upon another German naval group to enter and attack the British blockade. When the German attack came a few of the German ships slipped through the blockade but for the most part, the British were able to push the Germans back and invoke the blockade upon them. IV. The mobilization of Germany, France and England had been going on for many years before the war had officially began. France and England desperately tried to develop plans to deter the Germany onslaught. This was especially evident during the Plan XVII. Germany also developed plans of their own to attack France quickly in order to defend against the attacks of Russia and Great Britain. This was evident through their careful orchestration of the Schlieffan Plan. Another way that these countries mobilized themselves for war is the digging of the trenches that helped with their stalemates. The use of these trenches was an important part of the mobilization of their troops. It provided shelter, and a barrier between them and their enemies. 1 Gilbert, Martin. The First World War. (New York: Henry Holt and Company) 1994. 2 Gilbert, Martin. The First World War. (New York: Henry Holt and Company) 1994. 3 Eugene N. Anderson. The First Moroccan Crisis 1904-1906. (The University of Chicago Press) 1930. ...read more.