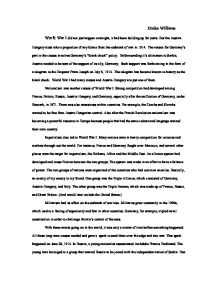 World War I did not just happen overnight, it had been building up for years. But the Austira- Hungary must take a proportion of any blame from the outbreak of war in 1914.

Jimika Williams World War I did not just happen overnight, it had been building up for years. But the Austira- Hungary must take a proportion of any blame from the outbreak of war in 1914. The reason for Germany's part in the causes involves Germany's "blank check" policy. Before sending it's ultimatum to Serbia, Austria needed to be sure of the support of its ally, Germany. Such support was forthcoming in the form of a telegram to the Emperor Franz Joseph on July 6, 1914. The telegram has become known to history as the blank check. World War I had many causes and Austria-Hungary are just one of them. Nationalism was another causes of World War I. Strong competition had developed among France, Britain, Russia, Austria-Hungary, and Germany, especially after the unification of Germany, under Bismark, in 1871. There was also uneasiness within countries. For example, the Czechs and Slovaks wanted to be free from Austro-Hungarian control. ...read more.

Germany, for example, tripled naval construction in order to challenge Britain's control of the seas. With these events going on in the world, it was only a matter of time before something happened. All these long-term causes needed and gave a spark to send them over the edge and into war. That spark happened on June 28, 1914. In Bosnia, a young nationalist assassinated Archduke Francis Ferdinand. The young man belonged to a group that wanted Bosnia to be joined with the independent nation of Serbia. Few thought this act could start a world war, but it was the straw that broke the camels back. During this time the United States stayed neutral, following Wilson's Moral Diplomacy. Believing that international disputes should be solved through negotiation rather than force. There were many reasons the United States entered the war, one of them was cultural links. Which meant that few Americans were truly neutral. Since America is a melting pot, many felt bounds to the country of their origin. ...read more.

By 1917, there was much hostility toward Germany. Germany supported dictatorship, which the United States is against. They violated Belgium's neutrality, they wage unrestricted submarine warfare, they attempted to sabotage American industry and they attempted to put Mexico against the United States through the Zimmerman Note. The note was from German foreign secretary, Arthur Zimmerman, and sent to the German minister in Mexico, on March 1, 1917. The note encouraged a German military alliance with the Mexicans, promising them support in regaining their "lost territories" in the southwestern United States. In April 1917, Wilson asked congress to declare war on Germany, and the United States became a part of the Allies. War world I had many complex causes, rather than one simple cause, which is what many people believe. "The war solved no problem. It's effects, both immediate and indirect, were earlier negative or disastrous. Morally subversive, economically destructive, socially degrading. Confused in its causes devious in its course, futile in its result, it is the outezding example of European history of meaningless conflict." ...read more.