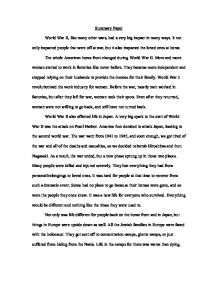 World War II, like many other wars, had a very big impact in many ways

Summary Paper World War II, like many other wars, had a very big impact in many ways. It not only impacted people that were off at war, but it also impacted the loved ones at home. The whole American home front changed during World War II. More and more women started to work in factories like never before. They became more independent and stopped relying on their husbands to provide the income for their family. World War 2 revolutionized the work industry for women. Before the war, mostly men worked in factories, but after they left for war, women took their spots. Even after they returned, women were not willing to go back, and still have not turned back. ...read more.

Many people were killed and injured severely. They lost everything they had from personal belongings to loved ones. It was hard for people at that time to recover from such a dramatic event. Some had no place to go because their homes were gone, and so were the people they once knew. It was a new life for everyone who survived. Everything would be different and nothing like the times they were used to. Not only was life different for people back on the home front and in Japan, but things in Europe were upside down as well. All the Jewish families in Europe were faced with the holocaust. They got sent off to concentration camps, ghetto camps, or just suffered from hiding from the Nazis. ...read more.

Soldiers suffered from many diseases, and spent months and years in the cold fighting. They might've made friends at war, but it was hard when one of them got shot or died. We know of all these stories about war life and how they fought, but in order to get the real feel for how it really was, someone would have to experience it first. The experience the soldiers had when they were fighting was not the best thing that could've happened to them. As you can see, World War II had a big impact all around the world. Many people in different countries faced challenges that they would have to eventually overcome. Most of the challenges that came across were life changing. Some died, and the rest had to start up a totally new life, something that none of us would be willing to do. ...read more.