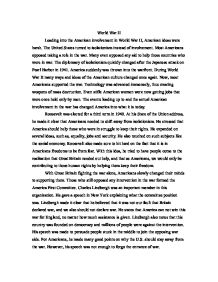 World War II Leading into the American involvement in World War II, American ideas were harsh. The United States turned to isolationism instead of involvement. Most Americans opposed taking a role in the war. Many even opposed any aid to help those countries who were in war. The diplomacy of isolationism quickly changed after the Japanese attack on Pearl Harbor in 1941. America suddenly was thrown into the warfront. During World War II many ways and ideas of the American culture changed once again. Now, most Americans supported the war. Technology was advanced immensely, thus creating weapons of mass destruction. Even stifle American women were now getting jobs that were once held only by men. The events leading up to and the actual American involvement in the war has changed America into what it is today. Roosevelt was elected for a third term in 1940. At his State of the Union address, he made it clear that Americans needed to shift away from isolationism. He stressed that America should help those who were in struggle to keep their rights. He expanded on several ideas, such as, equality, jobs and security. He also touched on such subjects like the social economy. ...read more.

After Roosevelt's speech, it was easy to see that America was indeed headed for war. After the attack on Pearl Harbor by Japan, America was looking to make sure there was no help from Japanese Americans for Japan. To reassure this, Japanese Americans were relocated to internment camps. These internment camps were not in the best condition. These centers somewhat resembled concentration camps. One man, Kikuchi, kept a diary during his time in the internment camp. In his diary, it is clear that most Japanese Americans were on the American side for the war. It is also very clear that while they were being put into these horrible conditions, people such as Kikuchi understood this. The idea to put Japanese Americans in internment camps was a brave one by the United States. These people were not against us, and we still treated them as foreigners who were only out to defeat us. Women also began to be treated differently. Many women took up jobs that only men were once allowed to have. Not only did women work the same jobs as men, they began to take up a similar lifestyle. Working six days a week was unheard of for most women. ...read more.

Leading up to the decision, Truman was uninformed of the bomb. After hearing the benefits of the atomic bomb from Stimson, Truman decided to bomb Japan. His only idea behind using the atomic bomb was so that the war would finally come to an end. As for those in Japan, they suffered greatly. Those that lived through the bombing of Hiroshima lived through something extraordinary. Nakamoto, a Japanese citizen, remembers all of the events of that day. She goes into great detail about the bombing. She also talks about how there were many like her that were burned by the bomb. The entire city was burning, not only those who were hit directly by the bomb. America in the Second World War was very different. The direct isolationism that the American government first played was quickly switched to war intervention with the bombing of Pearl Harbor. Gender and social roles were also affected by this war. Women and blacks were now able to work in jobs that were once reserved only for white men. The harsh environment that we forced upon our own citizens was nothing of the environments that those Japanese Americans had to live through. America in World War II was a very different kind of place. Our ideas and ways changed with a simple bombing. War is very delicate and it proved to be that way to the United States. ...read more.