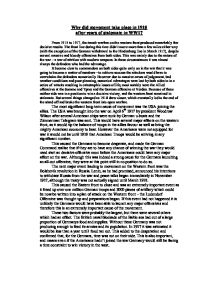 World War One: Break of the Stalemate

Why did movement take place in 1918

after years of stalemate in WW1?

From 1915 to 1917, the trench warfare on the western front produced remarkably few decisive results. The front line during this time didn’t move more than a few miles either way (with the exception of the German withdrawal to the Hindenburg line in March 1917), despite several massive and bloody offensives from both sides. This was mainly due to the nature of the war – a war of attrition with modern weapons. In these circumstances it was almost always the defenders who had the advantage.

It became clear to commanders on both sides quite early on in the war that it was going to become a matter of numbers – to achieve success the attackers would have to overwhelm the defenders numerically. However due to massive errors of judgement, bad weather conditions and poor planning, numerical advantages were lost by both sides in in a series of  attacks resulting in catastrophic losses of life; most notably were the Allied offensives at the Somme and Ypres and the German offensive at Verdun. Because of these neither side was in a position to win a decisive victory, and the western front remained in stalemate. But several things changed as 1918 drew closer, which eventually led to the end of the stand-off and broke the western front into open warfare.

The most significant long-term cause of movement was the USA joining the allies. The USA was brought into the war on April 6th 1917 by president Woodrow Wilson after several American ships were sunk by German u-boats and the Zimmerman Telegram was sent. This would have several major affects on the western front, as it would tip the balance of troops in the allies favour as well as bring the mighty American economy to bear. However the Americans were not equipped for war it would not be until 1918 that American Troops would be arriving in any significant number.

This caused the Germans to become desperate, and made the German Command realise that if they are to have any chance of winning the war they would need start an decisive offensive soon before the Americans could have any major affect on the war. Although this was indeed a strong cause for the Germans launching an all-out offensive, they were at this point still in no position to do so.

The next major event leading to movement on the Western front was the Bolshevik revolution in Russia. Lenin, as he had promised, announced his intentions to withdraw Russia from the war and peace talks began immediately in November 1917, although the treaty was not actually signed until March 1918.

This caused the Eastern front to close and was an extremely important event as it freed up over one million German troops and 3000 pieces of artillery which could be now be written into a plan of attack on the Western front – the Ludendorf Offensive was thought up and preparations began. If this event had not happened it is unlikely the Germans would have been able to launch any major offensives and therefore this is an extremely important cause of the movement.

These two factors were probably the largest, but there were several others which had an effect. The British naval blockade of the Baltic sea had cut of a large proportion of Germanys food and supplies. Without these Germany was not producing enough to feed its armies and its population. In 1917 it was estimated it would be less than a year until  food ran out. This added to the desperation and confirmed that, for the Germans, time was not on their side. This is also important, and means even if the Americans hadn’t joined the war Germany would still be facing a time constraint to win victory in the west.