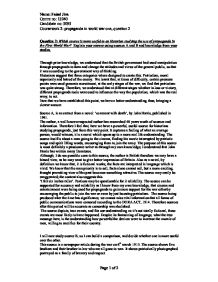 Question 2: Which source is more useful to an historian studying the use of propaganda in the First World War? Explain your answer using sources A and B and knowledge from your studies. Through prior knowledge, we understood that the British government had used manipulation through propaganda to form and change the attitudes and views of the general public, so that it was according to the government way of thinking. Historians suggest that three categories where designed to create this. Patriotism, moral superiority and hatred of the enemy. We learnt that, at times of difficulty, certain pressure points were used generate recruitment, at the early stages of the war, we find that patriotism was quite strong. Therefore, we understood that at different stages whether in loss or victory, different propaganda tools were used to influence the way the population, which was the real army, to act. Now that we have established this point, we have a better understanding, thus, bringing a clearer answer. Source A, is an extract from a novel: 'covenant with death', by John Harris, published in 1961. The author, a well known respected author has researched 40 years worth of sources and information. ...read more.

Despite its fantasizing of language, what the true message here, is the understanding how powerful the devices were to increase the morale of men, willing to sacrifice for their country. I will now study source B, so I can build a comparison, and decide whether one is more useful over the other. This source is a newspaper article during the war on 6th march 1915. The source shows five brothers and their brother in law who are all gone to war. It shows patriotically photographed portrayed as a family of bravery and respect. 'Who answered the call', they are referred to as those who answer the call. Showed to be family who has made their country proud, you should too. The audience is in Bath, the city has population of under a 100, 000 today, so therefore we are dealing with fairly small cities. It's appealing to encourage a more family recruitment. Judging the source in terms of facts or its ability to capture feeling or context, may be difficult, as this was under censorship. But it is beneficial as it helps understand the censorship and propaganda. The purpose of the source was to encourage and change attitude. ...read more.

Therefore, naturally this becomes useful evidence. To judge over the other, is difficult, because each source, inputs to our understanding regardless of its amount. Source A gives a more general view; the language allows historians to easily understand the manipulation. It is research that has been done for us. However, this is rather difficult with source B, its gives a concrete, real, evidence of propaganda, but requires historians to go further to get a wider conclusion. To make a conclusion, source B is true information, and really shows us propaganda people were exposed too, we can learn more, because we had proved earlier that the government used different propaganda at different times. There is a limitation, source B alone is not sufficient to achieve a wide impression, but using this with other sources is would give us potentially strong inference. However, as historians secondary sources are more reliable due to the depth of research, source A gives a powerful depiction of propaganda. I do believe that source B is better as fits the question, 'use of propaganda'. Clearly this is a censored article. As historians we can say that both sources aid our understanding. ?? ?? ?? ?? Name: Faisal Jiva Centre no: 13240 Candidate no: 3093 Coursework 2: propaganda in world war one, question 2 Page 1 of 2 ...read more.