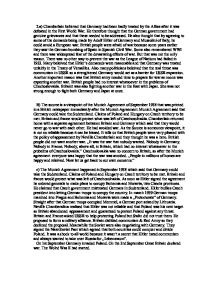 World War One - Source based research.

2.a) Chamberlain believed that Germany had been badly treated by the Allies after it was defeated in the First World War. He therefore thought that the German government had genuine grievances and that these needed to be addressed. He also thought that by agreeing to some of the demands being made by Adolf Hitler of Germany and Mussolini of Italy, he could avoid a European war. British people were afraid of war because some years earlier they saw the German bombing of Spain in Spanish Civil War. Some also remembered WWI and there was widespread fear of the devastating effects of war. But that was not the only reason. There was no other way to prevent the war as the League of Nations had failed in 1933. ...read more.

Munich Agreement said that Germany could take the Sudetenland. Claims of Poland and Hungary on Czech territory to be met. Britain and france would protect what was left of Czechosolvakia. Chamberlain returned home with a separate agreement between Britain and Germany which said that they would never go to war with each other. He had avoided war. As the Source is someones viewpoint, it is not so reliable because it can be biased. It tells us that British people were very pleased with the policy of appeasement by Neville Chamberlain and they thought he was a hero. British people did not want another war. "It was the war that nobody wanted. Nobody in Germany. Nobody in France. Nobody, above all, in Britain, which had no interest whatsoever in the probelms of Czechoslovakia." ...read more.

Straight after that German troops occupied Memmel, a German port seized by Lithuania. Neville Chamberalina realised that Hitler was not reliable and that Poland was his next target so Britain abandoned appeasament and guaranteed to protect Poland against any threat. Britain and France asked USSR to help protecting Poland but Stalin did not trust them. He proposed to form a military alliance. Britain disliked communism & Red Army so they declined the proposal. Meanwhile the Soviet were also negotiating with Germany. They signed the Nazi-Soviet Pact which agreed that both countries could conquer and divide Poland. It was a shock to all world because it wasn't a secret that Hitler hated communism and always wanted to take over Russia for "Lebensraum". On 1st September Germany invaded Poland. On the 3rd September Great Britain declared war. The Wolrd Was II had started. ...read more.