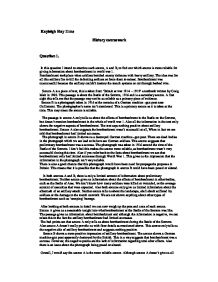 Kayleigh Hay 11ms History coursework Question 1. In this question I intend to examine each source, A and B, to find out which source is more reliable for giving information about bombardment in world war 1. Bombardment took place when soldiers bombed enemy defences with heavy artillery. The idea was for all this artillery fire to kill the defending soldiers or force them to retreat. Bombardment was unsuccessful because the artillery couldn't destroy the trench systems or cut through barbed wire. Source A is a piece of text, this is taken from 'Britain at war 1914 - 1919' a textbook written by Craig Mair in 1982. This passage is about the Battle of the Somme, 1916 and is a secondary source. A first sight this tells me that the passage may not be as reliable as a primary piece of evidence. Source B is a photograph taken in 1916 at the remains of a German machine -gun post near Guillemont. The photographer's name isn't mentioned. This is a primary source as it is taken at the time. This may mean the source is reliable. The passage in source A only tells us about the effects of bombardment in the Battle on the Somme, but doesn't mention bombardment in the whole of world war 1. Also all the information in the text only shows the negative aspects of bombardment. The text says nothing positive about artillery bombardment. Source A also suggests the bombardment wasn't successful at all, When in fact we are told that bombardment had limited successes. The photograph in source B shows us a destroyed German machine -gun post. There are dead bodies in the photograph which we are lead to believe are German soldiers. This source suggests that preliminary bombardment was a success. The photograph was taken in 1916 around the time of the Battle of the Somme. I don't feel this makes the source more reliable, as bombardment wasn't very successful during this time. ...read more.

The source also neglects to tell us anything about the preparations for attack and how they would use ground or aircraft reconnaissance. Snipers would have been used to kill soldiers if they looked over the trench wall. Also in the advert there is a man standing up in the trench, in reality this man would be shot dead on the spot. We are not told about illnesses or injuries caused by trench warfare. For example a lot of soldiers would have suffered 'shell shock'. They would have also suffered from things like blindness or loss of limbs. Finally we are not told about what happened behind the lines. In many areas, makeshift trenches and dressing stations were set up. Also, there were a lot of soldiers and support workers who helped during the war. Women also helped behind the lines, in Voluntary Aid Detachments (VAD) and the first-aid-nursing auxiliary (FANY). In 1917, a women's Army Auxiliary Corps was set up to cook and clean This source doesn't tell us anything about the reality of combat on the western front. It is most likely because that the advent would have been used to give a false image of war to the British public. Which helped to enlist more men into the army. Question 5: For source H we looked at a film called "all quiet on the western front". This film interprets aspects of war on the western front, in a very detailed way. This source is a story about a group of German teenagers who enlist in the German army. This source has a lot of strengths and weaknesses with regard to war on the western front. There are a number of strengths presented in the source. First of all, this film is an excellent representation of the barbarity of war. For example, the film shows full frontal attacks which took place continually during the course of the war. ...read more.

The poem gives us an insight into the incompetence of the Generals and the way in which the soldiers reacted to them. More importance, however is that the source suggests that the Generals actions prolonged the war. As we examine the list of sources; some appear much less useful when we try to understand why the war was prolonged. For example, Source H, a visual interpretation of the war on the western front, although showing some tactics used by the army, doesn't tell us about any major battles or military figures. These are the things we'd need to know if we want to find out exactly why the war was prolonged. But since some reference is made to full front attack, we are made aware that the tactic of attrition had some responsibility Source F is our next source on the scale of helpfulness. Source F is a poster; the poster shows soldiers smoking and was used for propaganda purposes in Britain. It gives a completely false impression of war on the western front. Posters such as these were used to give soldier's families' reassurance that they were having a heroic and adventurous time. This source gives us no information about why the war lasted so long, but it does tell us how propaganda was in Britain. Which may explain why people at home allowed to continue without protest The last source is the least useful in helping us understand why the war lasted so long. Source G is a primary source, which gives us some accurate information about trench life, but tells us nothing about why the war continued for four years. These sources only provide us with an indirect and limited understanding of why the war lasted as long as it did. When trying to understand why the war was prolonged we would need to access other information such as how politicians prolonged the war, reasons why the Schlieffen plan failed and the impact of new weapons on the war as a whole ?? ?? ?? ?? ...read more.