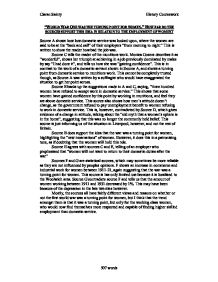 &quot;World War One was the turning point for women.&quot; How far do the sources support this idea in relation to the employment of women?

"WORLD WAR ONE WAS THE TURNING POINT FOR WOMEN." HOW FAR DO THE SOURCES SUPPORT THIS IDEA IN RELATION TO THE EMPLOYMENT OF WOMEN? Source A shows how low domestic service was looked upon, where the women are said to be at the "beck and call" of their employers "from morning to night." This is written to show the reader how bad the job was. Source C tells the reader of the munitions work. Monica Cosens describes it as "wonderful", shows her triumph at achieving in a job previously dominated by males by say "I had done it", and tells us how she was "gaining confidence". ...read more.

This shows that some women have gained confidence by this point by working in munitions, and feel they are above domestic service. This source also shows how men's attitude doesn't change, as the government refused to pay unemployment benefit to women refusing to work in domestic service. This is, however, contradicted by Source D, which gives evidence of a change in attitude, talking about the "old myth that a woman's sphere is in the home", suggesting that this was no longer the commonly held belief. This source is just informing us of the situation in Liverpool, however, and not the rest of Britain. ...read more.

This source is has only limited use because it is localised to the Woolwich area. Source G contradicts source F and tells us that the amount of women working between 1911 and 1931 decreased by 1%. This may have been because of the depression in the late twenties however. Mostly, the sources all have fairly different views and reasons on whether or not the first world war was a turning point for women, but I think that the trend amongst them is that it was a turning point, but only for the working class women, who would now find themselves more respected and capable of finding higher skilled employment than domestic service. Ciaran Sainty History Coursework 507 words ...read more.