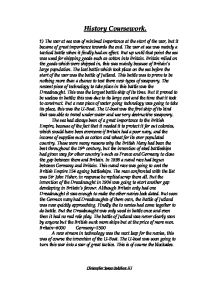 History Coursework. 1) The war at sea was of minimal importance at the start of the war, but it became of great importance towards the end. The war at sea was mainly a tactical battle when it finally had an effect. But up until that point the sea was used for shipping goods such as cotton into Britain. Britain relied on the goods which were shipped in, this was mainly because of Britain's large population. The last battle which took place on the sea before the start of the war was the battle of Jutland. This battle was to prove to be nothing more than a chance to test there new types of weaponry. The newest piece of technology to take place in this battle was the Dreadnaught. This was the largest battle ship of its time. But it proved to be useless in battle; this was due to its large cost and the time that it took to construct. But a new piece of water going technology was going to take its place, this was the U-Boat. The U-boat was the first ship of its kind that was able to travel under water and use very destructive weaponry. ...read more.

These planes where mainly used for spying over enemy lines. The pilots found this very difficult because of the lack of instruments provided. There where no radio, radar or even cameras. The pilots themselves had a handgun to shoot at enemy planes, goggles, jacket and a scarf. All this was necessary to prevent the pilots from obtaining frost bite and many other illnesses. Some pilots would even use whale blubber to stop the cold. The pilots had no parachute which was a great problem. This shows how poor the technology was for these pilots. The idea of attaching weapons was a failure because the propeller would get in the way. The next idea which came afoot was the idea of dropping hand grenades and bombs from the aircraft. This was not as successful as the methods of today. But a change was approaching, this change was the invention by a French pilot named Garros. He had invented a machine that enabled the pilot to shoot in front of them, using a machine gun mounted just behind the propeller. But the allied forces never took this idea seriously, until Garros and his invention where shot down over enemy lines and his invention was then used by the enemy. ...read more.

To do this the British government made the civilians get involved in helping to defend their country. In order to ensure that everyone could perform these tasks an act was passed. This act would be known as DORA. (The Defence of the Realm Act.) Contained in this act were many rules for the people of Britain to live by. This act was passed in 1914, and in many ways this gave the government power to control the economic resources which were used for the war effort, imprisonment without trial was also used as an act and control the lifestyle of the citizens of Britain. In some ways the Defence of the Realm Act (DORA), passed in August 1914, symbolises what the Home Front idea means. This gave government powers to commandeer economic resources for the war effort, imprison without trial, censor the printed or spoken word and greatly control a citizen's life. As well as rationing, public house opening times were restricted. This was as much to keep the nation fit for long hours at work, as to satisfy Lloyd George's anxieties over alcohol. Pubs could originally open between 0530 and 0030 hours; this was amended to 1200-1430 and 1830-2130 hours daily Christopher James Oakshott III ...read more.