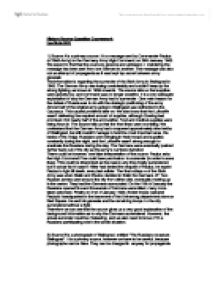 History Source Question Coursework Lee Male 5UU 1) Source A is a primary source. It's a message sent by Commander Paulus (of Sixth Army) to the Germany Army High Command, on 24th January 1943. We expect to find that the source is genuine and unbiased, considering the message has been sent from one German to another. The message was also not an attempt of propaganda as it was kept top secret between army generals. The information is regarding the surrender of the Sixth Army in Stalingrad in 1943. The German Army was losing considerably and couldn't keep up the strong fighting, as known in 1939 onwards. The source tells us that supplies were gravely low, and command was no longer possible. It is a very adequate explanation of why the German Army had to surrender. One main reason for the defeat of Russia was to do with the strategic positioning of the army. Almost half of the original army going to Stalingrad was redirected to the Caucacus. This caused problems later on. We also know that the Luftwaffe wasn't delivering the required amount of supplies, although Goering had promised. Not nearly half of the ammunition, food and medical supplies were being flown in. The source tells us that the front lines were crumbling. We understand that the German Army had conquered approximately nine tenths of Stalingrad, but still couldn't manage to hold the most important area, the banks of the Volga. ...read more.

Russia was really an enemy to Britain, but Germany was more of a threat to Britain (so they took the side of Russia). The cartoon shows us that the German army was small in comparison to the Russians. We can also see that it was the Russian civilians who were fighting. This is depicted by the man with a scythe and hammer in his hands, representing the industrial and agricultural workers. They were strong and brave. I think both sources are just as useful as each other. Source C shows an interpretation of the Germans, and Source D shows the interpretation of the British. But that's all, therefore I think the limitations outweigh the positive values. We don't see why it happened or how. However, there are a limited amount of sources which are able to tell all three qualities, why, how and the effects. We do however, have the valuable explanation of the effects. How people were feeling in 1943. 4) The two interpretations of why the Battle of Stalingrad came to an end, are different because the authors intended different points of view to go to a different class of audience. Source E, a primary German broadcast, is intended for the German public, therefore biased and another method of propaganda. This is contrasted with the selected piece from a Russian textbook, a secondary source, therefore biased towards the Russians. ...read more.

For Russia the defeat of the Germans was also quite important. Stalingrad was an important industrial town. It would have also been an important step for Germany to taking over the whole of Russia. The town was also not evacuated, it gave the Red Army an incentive to fight for. Also Stalin needed to keep the hopes of the Russian people of a communist state alive. He needed victory for support. Sources B and F show us how important the public view of Russia is. Source B, was predicted to be a propaganda method, trying to make the Russians look good and patriotic. It helped the Soviet morale grow stronger. Source F, which is written much later not only supports the facts but gives a biased view as well. Even years later they seem to need to make themselves look good. All this propaganda is helped again with source D. It shows the united Russia, of agricultural and industrial workers, working to fight the Germans off their territory. They were strong and patriotic. From this we can see that the take over of Stalingrad was necessary for both sides but for the different factors mentioned. Hitler needed the area for a further attack and then finally the elimination of Britain and the U.S.A in the war. Stalin needed to keep Stalingrad as it was a main industrial area and the morale and support of the people needed to be kept high. It was also quite a crucial turning point in the history of the second world war. ?? ?? ?? ?? ...read more.