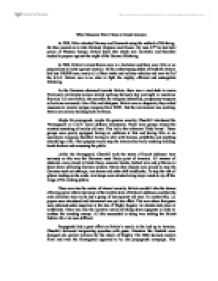 World war two - What measures were taken to resist invasion.

What Measures Were Taken to Resist Invasion In 1939, Hitler attacked Norway and Denmark using the method of Blitzkrieg. He then moved on to take Holland, Belgium and France. By June 22nd he had total power of Western Europe. Britain knew that attack was inevitable and therefore needed to prepare against the might of the German Blitzkrieg. In 1940, Britain's armed forces were in a bad state and there were little or no preparations to resist against invasion. At the embarrassing defeat of Dunkirk, Britain had lost 300,000 men, nearly all of their tanks and military vehicles and over half of the R.A.F. Britain was in no state to fight the mighty, efficient and unstoppable Blitzkrieg. ...read more.

Their purpose was to stop the invasion but really ended up building bomb shelters and reassuring the public. Unlike the Homeguard, Churchill took the status of beach defences very seriously as this was the Germans most likely point of invasion. All manner of obstacles were placed to block them; concrete blocks, barbed wire and pillboxes to shoot down advancing German soldiers. Many other objects were placed to stop the Germans such as tanktraps, iron drums and make shift roadblocks. To stop the risk of gliders landing on the roads, iron hoops were situated along major roads to rip off the wings of the landing gliders. There was also the matter of internal security. ...read more.

This propaganda bombardment was vitally important to Britain and without it, morale would have plummeted. In the end Hitler called off the invasion, but why was this? It is not very likely that Hitler pulled on the leashes of Blitzkrieg just because of the homeguard and Britain's pitiful defences, instead it is a lot more likely that when Hitler lost the Battle of Britain, it was a major blow to him as he was relying on his air attacks to conquer Britain so that his main body of men could concentrate on the formidably numbered Russia. So no the defences did not very likely turn Hitler away from Britain but instead it was the R.A.F. and the fact that Germany had bigger fish to fry in the form of Russia. Ben Bowden 11C ...read more.