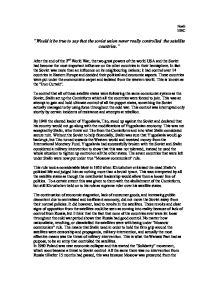 &quot;Would it be true to say that the soviet union never really controlled the satellite countries.&quot;

Noah 3IBC "Would it be true to say that the soviet union never really controlled the satellite countries." After the end of the 2nd World War, the two great powers of the world USA and the Soviet had become the most important influence on the other countries in their hemisphere. In fact the Soviet was more than an influence on its neighbouring nations; it had control over 14 countries in Eastern Europe and decided their political and economic aspects. These countries were put under the communistic carpet and isolated from the western world. This is known as the "Iron Curtain". To control that all of these satellite states were following the same communist system as the Soviet, Stalin set up the Cominform which all the countries were forced to join. This was an attempt to gain and hold ultimate control of all the puppet states, something the Soviet actually managed to by using force throughout the cold war. ...read more.

This was interpreted by all the satellite states as though the new Soviet leadership would allow them a looser line of politics. To a certain extent this was given to them with the abolishment of the Cominform, but still Khrushchev held on to his role as supreme ruler over his satellite states. The continuation of economic stagnation, lack of consumer goods, and increasing public discontent due to centralised and inefficient economy, did not move the Soviet away from their normal policies. It did however, lead to revolts in the satellites. These revolts and clear signs of opposition from the satellites could be seen as coming into reality because of lack of control from Russia, but I think that the fact that none of the countries ever were let loose throughout the cold war period shows that Russia had good control. No matter how nationalistic, revolting, or dissatisfied the satellites were with being under "Moscow communism" rule. ...read more.

In 1989 Russia gave up its sovereignty over the satellites, this was due to the beginning of modernisation and Russia falling behind in the arms race with USA. They simply could not hold up the control because of economical problems. Gorbachev saw the necessity of letting the east-bloc countries free so they could focus on economical growth. I think the answer to the title question is no, even though there were periods of revolt in all the satellites, none of them broke out or were allowed to have their own policies. There is only one exception to this; it is the incident in which the Soviet installed Gomulka as president of Poland. The enforcement of "Moscow communism" in the satellites was not a success anywhere and there was public discontent throughout the cold war, but still the fear and threat of military intervention assured the Soviet control. Even though their control was in a way superficial because it was based on military threats, it was still control. ...read more.