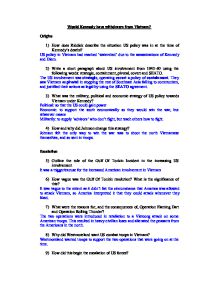 Would Kennedy have withdrawn from Vietnam?

Would Kennedy have withdrawn from Vietnam? Origins 1) How does Riddick describe the situation US policy was in at the time of Kennedy's deaths? US policy in Vietnam had reached 'watershed' due to the assassinations of Kennedy and Diem. 2) Write a short paragraph about US involvement from 1945-60 using the following words: strategic, containment, pivotal, covert and SEATO. The US involvement was strategic, operating covert a policy of containment. They saw Vietnam as pivotal in stopping the rest of Southeast Asia falling to communism, and justified their actions as legal by using the SEATO agreement. 3) What was the military, political and economic strategy of US policy towards Vietnam under Kennedy? Political: so that the US could gain power Economic: to support the south economically so they would win the war, but whatever means Militarily: to supply 'advisors' who don't fight, but teach others how to fight. 4) How and why did Johnson change this strategy? Johnson felt the only way to win the war was to shoot the north Vietnamese themselves, and so sent in troops. ...read more.

Attrition is when the Americans attempted to wear down the opposition as they knew they had more resources. Search and Destroy is where the Americans looked for any Vietnamese settlements, and when they found them they destroyed them. The Free Fire Zone was an area where if something moved, you shot it. Napalm is a liquid that catches fire and was poured down the Vietnamese tunnel network. 12) Why were the USA's allies concerned about the degree of commitment being placed in Vietnam? The more troops in Vietnam meant there were less troops keeping the peace in Europe. 13) What was Operation Ranchhand? An operation with the objective of destroying the jungle. 14) How did Operation Rolling Thunder develop? It started by the bombing of military bases, then supply depots and later supply trails, then industry and finally transport. 15) Why did the policy of attrition not work? It didn't wear down the Vietnamese enough and they were able to repel attacks, although it was very damaging. 16) How did the US strategy develop and make it less likely for a US victory? ...read more.

25) What would he have called this policy? 'Peace with honour' 26) How did congress try to limit the president's conduct of the war? The War Powers Resolution. 27) What was Vietnamisation? The gradual process of handing the war back to the South. 28) What were the Paris peace talks like? Why was this so? They dragged on mainly due to communist delaying tactics. 29) What strategy was used to try and produce movement on the side of North Vietnam? Bombing raids - Linebacker 1 & 2 - were started on the North to get them talking again. 30) Name the two historians who have contrasting views on this strategy. Herring is one. 31) What happened in Vietnam after the American withdrawal? Two years later the South fell to the communists. 32) What were the arguments raised in "The post-war war"? This is the academic discussion about the war. How they got involved and why they didn't win. 33) Was the media responsible for the US defeat? They had a role to play but not totally responsible. 34) Why did the war have a negative effect on the "Special Relationship"? It cooled slightly as the British didn't help. 35) What was the reaction to the war in other western countries? There were widespread protests. ...read more.