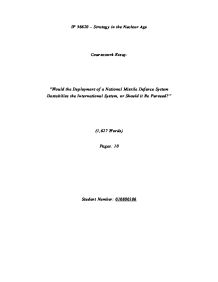 &quot;Would the deployment of a National Missile Defence System destabilise the international system, or should it be pursued?&quot;

This, critics argue, could re-ignite the arms race, as the US attempt to abandon the ABMT would be perceived as an antagonistic act whose sole aim (it would be perceived) would be to emphasise US power and its supremacy over Russia7. Therefore, the ABMT may have been negotiated in 1972, but it's meaning and symbolism remain as relevant today as it did throughout the Cold War. NMD's critics are also quick to contend that no rogue state is even close to posing a credible threat in the foreseeable future8. Critics also argue that the threat that nuclear-capable rogue states pose is at most, regional. The introduction of an NMD system would therefore at best achieve very little, or at worst would motivate such rogue states/terrorist groups to develop/obtain nuclear capabilities before the deployment of an effective NMD system. The final argument that critics of NMD advance is much more strategic in character. NMD, it is claimed, may be capable of defending against a long-range intercontinental attack, but would simply be unable to protect the US from a limited nuclear attack. It would, consequently, be logical for any potentially hostile adversary to attack with a submarine (or other similar attacking capability) off a near coast of the US. Even if the NMD system managed to intercept the missile - which would be unlikely - the nuclear fallout and subsequent radiation would be so catastrophic as to render the interception irrelevant. ...read more.

Highlighting what NMD can not defend against as a reason not to deploy it forsakes all that it can defend against. Critics of NMD fail to present any other national security option that would defend against accidental launch or a deliberate attack from a rogue state/terrorist group. All possible threats must be encountered for in national security policy. The introduction of a NMD system would not be destabilising. The contemporary geo-political realities are different to those of 1972, when the ABMT was negotiated, and those negotiating could envisage this development, as an opt-out clause was included in the treaty. Russia's relationship has moved way beyond what it was throughout the Cold War; the East and West are no longer locked in a deterrence relationship. The current economic difficulties experienced by Russia dictate that it would be unable to enter into an arms race even if it wanted to, and these difficulties show no sign of disappearing in the foreseeable future11. The democratically-elected US political elite has been elected to provide security for its citizens against all possible threats. Whilst NMD may not be able to account for all of the nuclear attacks that the US may potentially face, it can play a very specific part in the security of the US. The current system fails to provide security against the threats highlighted throughout this essay and it would be unacceptable not to count for all eventualities. NMD should therefore be deployed and play its specific and essential role in the security of the US. ...read more.