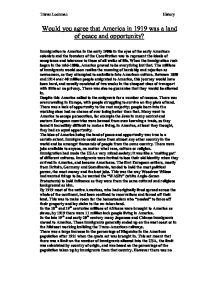 Would you agree that America in 1919 was a land of peace and opportunity? Immigration to America in the early 1900s in the eyes of the early American colonists and the founders of the Constitution was to represent the ideals of acceptance and tolerance to those of all walks of life. When the immigration rush began in the mid-1800s, America proved to be everything but that. The millions of immigrants would soon realize the meaning of hardship and rejection as newcomers, as they attempted to assimilate into American culture. Between 1850 and 1914 over 40 million people emigrated to America, this journey would have been hard, and usually consisted of two weeks in the cheapest class of transport with little or no privacy. There was also no guarantee that they would be allowed in. Despite this America called to the emigrants for a number of reasons. There was overcrowding in Europe, with people struggling to survive on tiny plots of land. ...read more.

In the 18th and 19th centuries millions of Africans were brought to America as slaves, by 1919 there were 11 million lack people living in America. In the late 19th and early 20th century many Japanese and Chinese immigrants moved to America. These immigrants generally ended up on the west coast or in the Midwest working building the Trans-American railways. There was a large increase in the percentage of Hispanics in the American population after 1921 when the quota act was brought in. This act meant that there was a limit on the number of immigrants allowed into the USA, the limit was calculated by country of origin, and was based on the percentage of the population taken up by immigrants from that country. However there was no limit on emigrants from Mexico, thus there was a large increase in the Hispanic population after 1921. For most of the immigrants the tone of excitement and opportunity gradually faded. ...read more.

However, this depended heavily on race, culture and religion because although there were jobs available to most races they were generally the jobs offered in their own communities. For example a black man would not have been offered a job to work in a Jewish jewellery shop in New York. People from the same country or ethnicity tended to stick together, and it would have been very hard to be accepted into a group that one did not "belong to". The idea that America was a land of peace is a completely different matter. I do not feel that America in 1919 was any more peaceful than the revolutionary Russia that was so feared in America at the time. With the amount of racial hatred and discrimination that was commonplace across the country, America cannot be called peaceful even to a tiny extent. However, America still managed to attract millions of immigrants in a relatively small amount of time, so the attraction of opportunity and illusion of peace must have been successful. Tristan Lochman History ...read more.