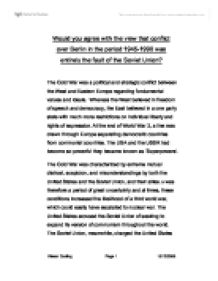 Would you agree with the view that conflict over Berlin in the period 1945-1990 was entirely the fault of the Soviet Union?

Would you agree with the view that conflict over Berlin in the period 1945-1990 was entirely the fault of the Soviet Union? The Cold War was a political and strategic conflict between the West and Eastern Europe regarding fundamental values and ideals. Whereas the West believed in freedom of speech and democracy, the East believed in a one party state with much more restrictions on individual liberty and rights of expression. At the end of World War 2, a line was drawn through Europe separating democratic countries from communist countries. The USA and the USSR had become so powerful they became known as 'Superpowers'. The Cold War was characterized by extreme mutual distrust, suspicion, and misunderstandings by both the United States and the Soviet Union, and their allies. It was therefore a period of great uncertainty and at times, these conditions increased the likelihood of a third world war, which could easily have escalated to nuclear war. The United States accused the Soviet Union of seeking to expand its version of communism throughout the world. The Soviet Union, meanwhile, charged the United States with practising imperialism and attempting to stop revolutionary activity in other countries. There has been much debate about when the Cold War started, but most Historians agree it began soon after World War 2 ended. One of the defining events was the division of Germany and particularly the city of Berlin. Organising the occupation of Germany was agreed at the Yalta and Potsdam Conferences attended by the USA, USSR and Britain. ...read more.

West Berlin continued to remain an annoyance to the Soviet leaders as it was an advertisement for the economic success of Western Europe. Further East Germans could move freely in to West Berlin and then on to West Germany. This became a continual source of embarrassment as between 1949 and 1960 approximately three million people left East Germany. This was a major coup for the West as these people were leaving the communist system that supposedly looked after its workers and families to look for a better life in the capitalist West. Among these 3 million people were highly qualified men who were of little value to the West but were skilled workers that East Germany could not afford to lose. By 1961, the number of refugees fleeing to the West represented about one-sixth of East Germany's population. On August 12th 1961, a record 4,000 people made their way to West Berlin to start a new life in the West. This pushed the communist authorities into taking action. Berlin was to become the centre of the Cold War again in later years with the building of the Berlin Wall. Russia was determined that Berlin would never be the capital of a united Germany and would never regain their powerful status to start another world war. The border between East and West Berlin was closed in 1961 and a barbed wire fence was erected to prevent East Germans crossing the border to the West. ...read more.

In addition the Marshall Plan was also established, which was a programme offering economic aid to European states to help them recover from the war, although ultimately this was only given to Western democracies. Such policies were viewed as aggressive offering money and weapons to the enemies of the Soviet Union. The speeches made by Truman were also very confrontational particularly his speech to the US congress March 1947. "Force is the only thing the Russians understand" ... "It relies on terror and oppression ... I believe it must be the policy of the United States to support free peoples who are resisting subjugation by armed minorities or outside pressure". Clearly such an approach intensified an already delicate situation. Neither did the West help the situation with the creation of NATO, which was again seen as an aggressive move aimed at the USSR. It can be seen that there were many causes which led to the complex situation of the Cold War. Add to this the mistrust and suspicion common at the time and the misunderstandings of policies and it is clear the blame for the Cold War cannot be placed on any one person or country. Although many of the tensions that existed in the Cold War can be attributed to Stalin's policy of Soviet expansion, the argument cannot be sustained that they were entirely responsible. Rather it developed as a series of events, which occurred as the struggle for supremacy between the Superpowers escalated. ?? ?? ?? ?? Kieran Cooling Page 1 15/12/2008 ...read more.