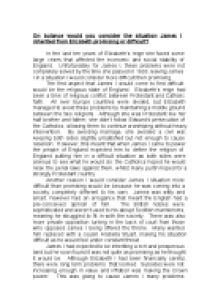 Would you consider the situation James I inherited from Elizabeth promising or difficult?

﻿On balance would you consider the situation James I inherited from Elizabeth promising or difficult? In the last ten years of Elizabeth?s reign she faced some large crises that affected the economic and social stability of England. Unfortunately for James I, these problems were not completely solved by the time she passed in 1603, leaving James I in a situation I would consider more difficult then promising. The first aspect that James I would come to find difficult would be the religious state of England. Elizabeth?s reign had been a time of religious conflict between Protestant and Catholic faith. All over Europe countries were divided, but Elizabeth managed to avoid these problems by maintaining a middle ground between the two religions. Although she was Protestant like her half brother and father, she didn?t follow Edward?s persecution of the Catholics, allowing them to continue worshiping without heavy intervention. By avoiding marriage, she avoided a civil war, keeping both sides slightly unsatisfied but not enough to cause rebellion. ...read more.

James I had expected to be inheriting a rich and prosperous land but he soon found it was not quite as promising as he thought it would be. Although Elizabeth I had been financially careful, there were long term problems that loomed. Subsides were not increasing enough in value and inflation was making the Crown poorer. This was going to cause James I many problems especially as he was such a extravagant spender. In addition, the population of England had rapidly grown but the agriculture couldn?t multiply as quickly. This meant there was a lack of industry leading to unemployment. In addition to this from 1594-97 there were horrendous harvests causing starvation in many parts of Northern England. With the starvation and unemployment came low moral. This put James in a tough situation as he needed to win over the people of England and re-establish the country economically. As well as economic worries, Elizabeth had bequeathed a unstable relationship with Ireland. ...read more.

He saw the situation as an opportunity for himself, and we could argue that the ?problems? Elizabeth left were opportunities for him to prove himself as the great king we could be. In addition, some people were very pleased to have a man back on the throne after Elizabeth?s 70 year reign and were interested to know what direction he would take. He was lucky enough to inherited Elizabeth?s chief minister Robet Cecil who was very capable minister and a unforgiving politician who was good at realizing who the enemy at court where. He also didn?t have any worries about an heir as he already had four children when he came to the room, meaning his line was sure to continue for a long time, arguably putting him in a very promising situation. In conclusion, I believe James I situation was both promising and difficult, but on balance more difficult as England was not in a secure state when he arrived, and he was in new territory, out of his depth within a society he did not know. ...read more.