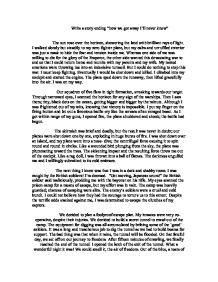 Write a story ending &quot;how we got away I'll never know&quot;.

Write a story ending "how we got away I'll never know" The sun rose over the horizon, showering the land with brilliant rays of light. I walked slowly but steadily to my zero fighter plane, but my calm and unruffled exterior was just a mask to hide the fear and tension inside me. Whereas one side of me was willing to die for the glory of the Emperor, the other side wanted this devastating war to end so that I could return home and reunite with my parents and my wife. My mixed emotions were throwing me into an indecisive turmoil. But I could do nothing to stop this war. I must keep fighting. Eventually I would be shot down and killed. I climbed into my cockpit and started the engine. The plane sped down the runaway, then lifted gracefully into the air. ...read more.

I was shot down over an island, and my plane went into a nose- dive; the centrifugal force causing it to spin round and round in circles. Like a wounded bird plunging from the sky, the plane was plummeting toward the trees. The sickening impact and the resulting force threw me out of the cockpit. Like a rag doll, I was thrown into a ball of flames. The darkness engulfed me and I willingly submitted to its cold embrace. The next thing I knew was that I was in a dark and shabby room. I was caught by the British soldiers! I'm doomed. "Get moving, Japanese scum!" the British soldier said maliciously, prodding me with the bayonet on his rifle. My eyes scanned the prison camp for a means of escape, but my effort was in vain. ...read more.

We could smell it, the air of freedom. Out of the blue, a team of British soldiers rushed out. Alas, we had been betrayed! In a moment of foolishness, I pushed away the soldiers and made a desperate run for freedom. The British soldiers opened fire simultaneously. I screamed as the bullets thumped into me. But that didn't stop me from running. I must escape! I could not die! Not here! The shock of the impact tore into my back, and then I felt so weak and plunged head-first to the ground. Then the firing stopped. Then, I could feel my body being hauled. I opened my eyes weakly, then I saw my army friend, he was smiling and said "we are free," I smiled, "yes, we are free at last." Consciousness again slowly faded away. How we got away I'll never know. ...read more.