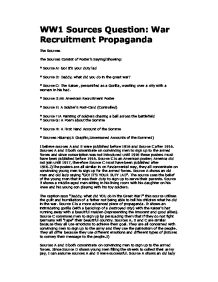 WW1 Sources Question: War Recruitment Propaganda The Sources The Sources Consist of Poster's Saying/Showing: * Source A: Go! It's your duty lad * Source B: Daddy, what did you do in the great war? * Source C: The Kaiser, personified as a Gorilla, crawling over a city with a woman in his had. * Source D:An American Recruitment Poster * Source E: A Soldier's Post-Card (Controlled) * Source F:A Painting of soldiers chasing a ball across the battlefield * Source G: A Poem about the Somme * Source H: A First Hand Account of the Somme * Sources H&J: Graphic,Uncensored Accounts of the Somme1) I believe sources A and B were published before 1916 and Source C after 1916. Sources A and B both concentrate on convincing men to sign up to the armed forces and since conscription was not introduced until 1916 these posters must have been published before 1916. Source C is an American poster; America did not join until 1917, therefore Source C must have been published after 1916.2)The posters are all similar in on fundamental way, they all concentrate on convincing young men to sign up for the armed forces. Source A shows an old man and old lady saying "GO! IT'S YOUR DUTY LAD". The source uses the belief of the young men that it was their duty to sign up to serve their parents. ...read more.

Source J paints the picture in words, it describes the battlefield as a "morass of glue-like mud" and gruesomely describes a face, which had been detached from its body and left floating in the mud. It continues to describe various limbs protruding from the ground and how shell bombardment had destroyed concrete strong-posts. Source I portrays world war one as a secure, happy and proud atmosphere; set in beautiful surroundings where putting ones head above the parapet was not dangerous. Source J however portrays world war one as a massacre where heavy bombardment destroyed everything, ripped people to pieces and turned the ground into sludge. They paint these two very different pictures of world war one for one simple reason; one is an advertisement trying to sell cigarettes and the other is a primary source written in a man's diaries as a record of the war. If source I portrayed a similar picture as source J, not only would the advertisement not sell many cigarettes the British government would not have allowed its publication (due to its adverse affect of the home front).7) I believe that sources F and G are unreliable and E is a reliable source of what it was like in the trenches. Source E is an actual post card issued to soldiers on the front line. Its use of set sentences, which can be deleted, as necessary and the prohibition of the addition of extra information on the postcard shows how information was censored during the war. ...read more.

Therefore the only sources available to the historian would have been posters and newspaper articles. However we know that the government had either produced these or influenced/changed their content. Unless the historian spoke to a soldier or went to the front line to see the conditions he/she would not be able to provide an accurate account of life in the trenches. Since the war did not end until 11th November 1918 it would have been impossible for him/her to speak to soldiers or visit the front line during the war and during the last month and a half of 1918. As time went on more and more soldiers started to write articles and memoirs of their experiences during the war. The war involved so many people it would have been impossible for the government to keep the truth of life in the trenches locked up forever. A historian writing a long time after the war would produce an account based on memoirs and diaries and therefore would provide a much more balanced and accurate account concerning life in the trenches. A historian writing in 1918 through no fault of his own would write an account praising the war and not including the details which are included in sources H and J. He/she would be ignorant of the suffering and disgrace endured by soldiers during the war. They would write about the glory and pride of the war because that is what his/her sources would have told them about life in the trenches. ...read more.